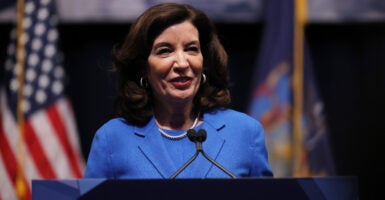 With Roe v. Wade no longer dictating abortion laws, state lawmakers are taking up the fight. Both pro-life and pro-abortion actors are asking the same question: Are we ready for “life after Roe”?

Many states are enacting laws to protect the lives of preborn children. The laws range from Oklahoma’s “life begins at conception” law to Wisconsin’s, which would protect the unborn after 20 weeks’ gestation.

State courts, such as one in Iowa, are overturning previous rulings that codified a “right” to abortion.

The loud minority—16 states, plus the District of Columbia—are moving in the opposite direction. Legislators and activist nonprofits are working to enshrine abortion within their state constitutions and laws.

Beyond pro-abortion laws, some states are seeking to become “abortion sanctuaries.”

Some such states provide a stipend for travel, housing, and child care. Some give out-of-state patients limited legal recourse—if the lawsuit is filed by the patient and not another entity. But most don’t address it.

In short, the goal of abortion sanctuary states is to shield abortion providers and medical doctors from legal risk. It incentivizes them to solicit and advertise abortion access on a national scale.

Abortion sanctuary laws go beyond laws that permit abortion. States with permissive abortion laws, such as those highlighted in Heritage’s interactive graphic, involve policies for residents of their own states.

Technically, a woman can travel to that state and receive an abortion, regardless of her own state’s abortion laws. Still, such states may or may not protect their medical providers from lawsuits or subpoenas from the patient’s state of residence. Abortion sanctuary laws do just that.

True “safe haven” laws allow desperate women to leave newborn babies with a private actor. “Safe harbor” laws for abortion, in contrast, create even more incentives to take the life of the unborn.

Here’s what that could look like in three leading states:

Before the May 2 leak of the Supreme Court draft opinion overruling Roe, Connecticut passed the Reproductive Freedom Defense Act. The bill expands the type of medical professionals who can perform an abortion without the supervision of a licensed doctor.

A clever “clawback” provision enshrined Connecticut’s status as an abortion sanctuary by shielding medical professionals for legal liability. Gov. Ned Lamont signed the bill in May. It’s set to take effect in July.

Following Connecticut’s lead, New York passed a package of bills to strengthen its abortion laws and enshrine its legal status as an abortion sanctuary for out-of-state patients.

New York Gov. Kathy Hochul signed the bills into law and pledged an additional $35 million for an abortion fund. Five of the six bills protect providers and patients from out-of-state lawsuits or subpoenas related to abortions, including claims of malpractice. The sixth bill opens a long-term investigation into the operations of pro-life pregnancy care centers across the state.

As in Connecticut and New York, California abortion laws purport to protect preborn babies after viability, but include broad and undefined exceptions for the life and health of a mother.

The Legislature passed a bill removing insurance co-pays for abortions and introduced a package of 13 bills that, if passed, would make the state an abortion sanctuary.

Together, the bills provide stipends for women traveling for an abortion and more money for doctors who perform abortions on low-income patients.

Again, abortion sanctuary laws don’t merely permit, but encourage, women to end the lives of their preborn sons and daughters. They leave women more vulnerable to malpractice and coercion with fewer means of recourse. Furthermore, by lowering the bar to entry for abortion providers, they pose a grave threat to the women.

These laws could transform abortion into a big interstate business. That means that although the Supreme Court has now returned the question of abortion to the people and their local elected officials, the federal government will have a key role to play in protecting our most vulnerable neighbors.