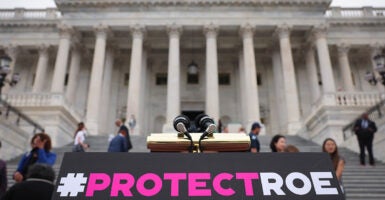 If the Supreme Court strikes down Roe v. Wade, some attorneys would refuse to prosecute individuals violating abortion bans in red states. Pictured: A "Protect Roe" sign is seen in front of the steps to the House of Representatives on May 13 in Washington, D.C. (Photo: Win McNamee/Getty Images)

Liberal prosecutors in red states have pledged to not enforce abortion bans that could be enacted in the likely event that the Supreme Court overturns Roe v. Wade and allows states to restrict abortions.

Several state and local attorneys general have made public commitments to decline prosecuting individuals who break abortion laws by providing or receiving abortions. If justices strike down Roe, after a leaked draft opinion revealed May 2 that they likely would, states will have more leeway to restrict abortions throughout pregnancy.

Fairfax County Commonwealth Attorney Steve Descano of Virginia pledged to never prosecute women for abortions in a May 22 op-ed for The New York Times.

“Almost two and a half years ago, I took my oath of office as prosecutor and swore to protect my community from those who broke the law,” he wrote. “The real threat, I now realize, may stem from those who write the law.”

The night the leaked draft opinion was made public, Nashville District Attorney Glenn Funk said he wouldn’t prosecute women who get abortions or doctors who perform them, according to News Channel 5 Nashville.

Sherry Boston, the district attorney of DeKalb County, Georgia, told U.S. News in May that prosecutors often dismiss cases in order to promote the best interests of the community. She plans to use this “prosecutorial discretion” to avoid prosecuting abortion cases.

“It’s really just going to make our communities less safe,” Boston said, according to U.S. News. “And as the district attorney who took an oath to protect my community, I think it’s important for me to have policies in place that do just that for the community that I serve.”

Orleans Parish District Attorney Jason Rogers Williams of Louisiana pledged to focus on shootings, rapes, and carjackings rather than abortion.

The Daily Caller News Foundation reached out to each of these attorneys, but none commented or responded to questions about whether they would consider resigning over their unwillingness to enforce the law.