Enforcing Anti-Abortion Laws Is Neither Pro-Life Nor Pro-Choice. It’s Rule of Law. 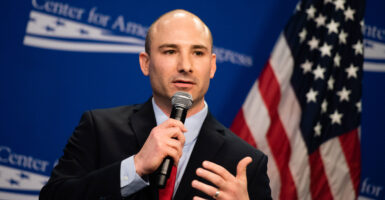 Steve Descano—seen here on Dec. 17, 2019, shortly before taking office as commonwealth's attorney for Fairfax County, Virginia, at an event at the liberal Center for American Progress—wrote in a recent New York Times op-ed: “No matter what the law in Virginia says, I will not prosecute a woman for having an abortion, or for being suspected of inducing one." (Photo: Sarah L. Voisin/The Washington Post/Getty Images)

Isaac Bock is an intern with The Heritage Foundation and a member of its Young Leaders Program.

Even before a leaked draft opinion indicated that the Supreme Court might overrule its 1973 Roe v. Wade decision creating a right to abortion, a growing number of liberal prosecutors throughout the country appeared determined to protect abortion anyway.

Their strategy? Refusing to do their job.

Attorneys general in nearly a dozen states and the District of Columbia have joined locally elected prosecutors from states across the country in pledging not to prosecute those who provide or receive abortions if their state legislature criminalizes the procedure.

They join 68 prosecutors who published a statement, dated October 2020, which characterizes seeking an abortion as a woman’s “personal … choice” about “[her] own health care” and performing an abortion as “treatment” by doctors.

The statement refers to abortion simply as an “issue” without mentioning, as even the Supreme Court did in Roe, the unborn child that an abortion kills.

Thirteen states have enacted laws to criminalize abortion if and when the Supreme Court reverses Roe. Five states have pre-Roe abortion prohibitions that would come back into effect as well, according to The New York Times.

Whether these laws are recent or long-standing, limited or broad, these prosecutors have already pledged not to enforce them before they have even gone into effect.

Their attempt to suggest legitimate reasons for such a blanket dereliction of duty is hardly persuasive. They claim, for example, that they lack resources to pursue such cases, but have no evidence to back that up because none of these laws is yet in effect.

And even speculation about the resources that would be needed would not justify a blanket refusal to enforce any of these laws.

This is not the first time liberal prosecutors have refused to enforce laws they don’t like. Many refuse to prosecute crimes ranging from drug possession to prostitution to threats including domestic violence.

Indeed, cities with rogue prosecutors have seen significant spikes in crime, yet the district attorneys ignore the pleas of their constituents, favoring lawbreakers over the law-abiding.

“No matter what the law in Virginia says, I will not prosecute a woman for having an abortion, or for being suspected of inducing one,” wrote Steve Descano, commonwealth’s attorney for Fairfax County, Virginia, in a recent New York Times op-ed.

By effectively neutralizing entire categories of laws, these rogue prosecutors are treating the lawmakers responsible for them—and the people who elected them—as though they simply don’t exist.

They have single-handedly replaced our system of government—with the separation of powers and elected legislatures—with one of their own making. Prosecutors have discretion over how to perform the duties, including enforcing duly enacted laws in individual cases. Refusing to enforce entire categories of laws, especially before they are even in effect, looks more like a way of neutralizing the legislature’s power to enact those laws.

Any middle-schooler (at least where civics is still taught) knows this. If prosecutors want to determine what our laws are, they should run for the legislature.

“The Constitution does not prohibit the citizens of each State from regulating or prohibiting abortion,” wrote Justice Samuel Alito in the leaked draft opinion in Dobbs v. Jackson Women’s Health Organization. “[Roe v. Wade] and [Planned Parenthood v. Casey] arrogated that authority. We now overrule those decisions and return that authority to the people and their elected representatives.”

That is where that authority belongs. This issue, therefore, is neither pro-life nor pro-choice. This isn’t about politics or party. Demanding that prosecutors do their job is simply the rule of law.