How Justice Is Denied When Prosecutors Go Rogue 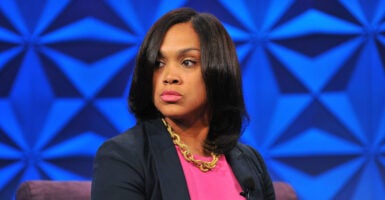 Marilyn Mosby—seen here in Los Angeles on June 24, 2017—has been Baltimore state's attorney since January 2015. Prosecutors like Mosby have prosecuted selectively through glasses that see only race. (Photo: Jerod Harris/Getty Images)

Maryland Gov. Larry Hogan recently criticized Baltimore State’s Attorney Marilyn Mosby for her egregious mishandling of cases and her allowing of criminals to return to the streets, unsupervised and unpunished, with the potential to add more victims to Baltimore’s growing list of victims of preventable criminal activity.

What is occurring in Baltimore is unilateral justice, and it is wrong for a variety of reasons.

This isn’t justice; it is politics infiltrating what is meant to be an apolitical part of our system of government.

The office of Mosby has declared that nine distinct sorts of offenses would not be prosecuted. Prostitution, drug possession, attempted drug delivery, and urinating and defecating in public are just a few of them.

It is easy to dismiss drug distribution as a way to make money, but until these people see the devastation that these drug distributors, both big and small, cause in their communities, they’ll never understand how despicable a crime it is.

Another frightening subject is prostitution. By neglecting to pursue prostitution, the state is effectively encouraging the degradation of young girls’ morality and putting them at risk by allowing them to work side by side with pimps and go home with strangers whose actual intentions are often unknown.

Baltimore is now seeing an increase in homicides, to the point that it now ranks second in the “murders per capita” category.

What we need to ask today is what kind of ludicrous political leanings one would need to refuse to prosecute the sorts of people Mosby has refused to prosecute. Their far-left political leanings appear to have driven them to utilize race as the major motivator for punishing or not punishing. The main problem, it appears, is that prosecutors like Mosby have prosecuted selectively through glasses that only see race.

The concept that has persisted in their minds is a combination of the following: Colored people commit crime because society has placed them in a precarious position, forcing them to commit the crimes that they do, and colored people are disproportionately targeted by police.

All of this contributes to the creation of a climate in which a perceived racial gap is the primary motivating factor in the criminality of people of particular races, if not the only one. Each individual who commits a crime is a human being, regardless of race, and just as we should not condemn others based on the color of their skin, we should not neglect to judge others when they commit heinous crimes, based on the color of their skin.

It is not difficult to realize that a white man who attacks his wife is equally as blameworthy and deserving of prison as a black man who does the same. The weight that political prosecutors place on a defendant’s skin is inconceivable.

The Kyle Rittenhouse trial is an excellent illustration of this. While it did not take place in Baltimore, it demonstrates prosecutors’ propensity to utilize race and politics to thrust themselves into the public eye and further their political careers and objectives.

At a riot in which thousands of people looted, ransacked, and destroyed small businesses and terrorized innocent people, Rittenhouse, a white teenager, shot and killed two individuals in self-defense. But who comes to mind now when we think of the riots in Kenosha, Wisconsin? Rittenhouse, because he was the one who was punished.

People who do horrible things need to be punished in the most appropriate way possible for the crimes they commit. They should not be released back onto the streets to produce new victims and crimes for the courts to deal with and for prosecutors to waste their time on.

Citizens, after all, have no ability to punish others. Our responsibility is simply to report crimes to those who are in charge of prosecuting individuals for those crimes. How can we trust prosecutors who refuse to effectively discharge their duties in the best interests of the public when ordinary citizens lack the ability to do the same?