I Had an Abortion. Here’s Why I Want Roe Reversed. 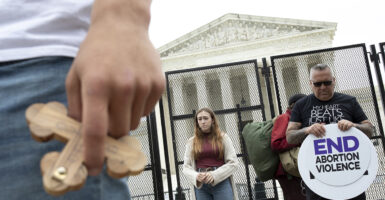 Cathy Harris had an abortion when she was younger but is now hopeful after the leak of a draft Supreme Court opinion indicating that Roe v. Wade will soon be struck down. Pictured: Pro-lifers pray outside the U.S. Supreme Court on May 5, 2022, in Washington, D.C., following the leaked draft of the court's potential decision to overturn Roe v. Wade. (Photo: Tom Brenner/Getty Images)

Cathy Harris is the author of "Created to Live: Becoming the Answer for an Abortion-Free Community."

The recent leak of a draft opinion from the Supreme Court potentially striking down Roe v. Wade is as shocking as it is gratifying.

Shocking because, if adopted by the court, the opinion would reverse a horrendous decision America has been suffering under for nearly 50 years. And gratifying because, even though I myself had an abortion when I was very young, I grew to deeply regret it and have done all I can in the years since to end this horrible injustice in our land.

There are two sides to every story. In the case of abortion, there are two sides, two narratives, and two goals—and I’ve delved deeply into each one. I have sat in the waiting room on both sides of the “abortion debate.” I’ve ridden the roller coasters. I’ve walked up to the abortion clinic as a teen seeking help, and I have wept on the sidewalk outside of clinics as I have watched hundreds of other women seek some kind of answer in the midst of their confusion.

The last 20 years has been a journey of intense truth-seeking and one of desiring authentic compassion. I found myself beginning on one side of this story and ending up on the other.

My pro-life stance is more than an opinion; it is a faith-filled, moral, and spiritual resolve. After experiencing my own abortion and sitting eye-to-eye with hundreds of hurting post-abortive women over the years, I have no other choice but to believe abortion has to end one day. It has to end for the sake of the innocent children being killed and for the scared, coerced, or misled women who feel they have no other choice.

When I read the number 63.5 million, which is the estimated number of abortions since Roe was decided on Jan. 22, 1973, and let it soberly sink in, it compels me to act, pray, and believe for an expiration date.

And here we potentially are.

My journey into the pro-life movement began in 2001 when I started volunteering in a pregnancy center. I signed up to help other women make a better decision than my own. Yet I ended up spending an excessive amount of time watching counseling videos to help me process the inescapable reality of my own choice to abort.

My 17-year-old immature decision haunted me. Even after several years, I couldn’t shake it. I was told having an abortion would help me move on with my life, but the opposite came to pass. I was told it was not a big deal, but it consumed my thoughts. I found myself grieving the loss of a person that our culture communicated to me I was not allowed to grieve. I was left with more devastating questions than answers.

Years of counseling women and volunteering overlapped with a prayer gathering in 2005 in Washington, D.C., where I stumbled upon a passionate group of people who were praying for the end of abortion. The thought of such a prayer resonated with my very core, and I suddenly wrapped myself around it in such a way that it surprised me.

In the midst of this gathering, I faced the truth that I was a mom of a real baby whom I deeply missed. I realized I had been deceived in so many ways and allowed myself to make a rash life-or-death decision in the name of “women’s rights.”

For the first time since my abortion in 1999, truth lovingly smacked me in the face, and I finally woke up.

What followed this prayer meeting were years of face-to-face conversations with pro-life leaders from all around the country, a former abortion doctor, post-abortive women, women on the pro-life side of abortion clinic sidewalks, pro-abortion women, and young pregnant teenagers. I desired to hear them all. I wanted to soak in their stories. I knew every abortion or possible abortion decision had real faces connected to it—and real lives were at stake.

I jumped in with both feet to see abortion end—not for glamour, a platform, a job, a book deal, or even a movement. I dedicated myself to this cause because it was the right thing to do. I knew too much. I saw too much. I experienced too much. I want to look my children in the eyes one day and be able to tell them that I did all I could do to end the tragedy of abortion. I could not idly sit on the sidelines as a spectator as an ongoing tragedy unfolded, often unnoticed.

Today, we stand at a unique moment in history. If the Supreme Court ultimately adopts this leaked opinion and strikes down Roe v. Wade, in many ways, this will be a new day for life—the beginning of a new season. And in other ways, it will be just like every other day in the pro-life movement, because the fight for life will not end but will continue in the states.