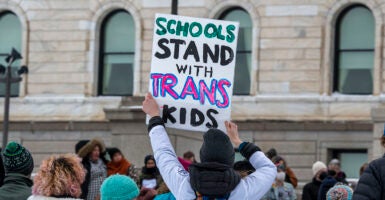 For the past two years, 14 parents have been fighting to protect their children and retain their rightful authority over them within the Madison Metropolitan School District in Wisconsin over the district’s secretive transgender policy. The policy ordered teachers to hide children’s gender identity issues from their parents and to affirm the children’s chosen identities at school.

“We asked the court to recognize that parents have the right to direct the upbringing of their children,” Luke Berg, attorney at the Wisconsin Institute for Law and Liberty, told The Daily Signal. “Yet the Madison Metropolitan School District is deceiving parents and excluding them from important decisions about the well-being of their children. We are optimistic that the court will do what is right and protect the safety of children and the rights of parents.”

Attorneys filed the original lawsuit, Doe v. Madison Metropolitan School District, in February 2020. In late September 2020, a state court in Wisconsin issued an order prohibiting the school district from intentionally deceiving parents about their children’s activities—especially if a child was struggling with gender identity issues.

Madison is the second-largest school district in Wisconsin, with approximately 27,000 students attending 52 schools. A few years ago, the district adopted a policy that promoted both transgender ideology and gender fluidity and that undermined parental rights, all in one guideline.

Here’s how it worked: Teachers were required to fill out a “Gender Support Plan” form for any child who expressed gender dysphoria or who asked to have a transgender treatment plan. Plans included changing the name and pronouns a child was called at school without the parents’ knowledge.

Under the federal Family Educational Rights and Privacy Act, parents have the express right to review any school records about their children, but because of the way this form was intentionally designed, they were prohibited from viewing, or even knowing about, the Gender Support Plan.

The school administration had to be creative to determine how to work around the Family Educational Rights and Privacy Act. Under the law, parents can’t access a teacher’s “personal” notes about a student. So, a section of the Gender Support Plan informed teachers to file the plan in the teacher’s “personal” file, not in student records, so it remained exempt from federal law and out of sight from parents.

The policy also said: “School staff shall not disclose any information that may reveal a student’s gender identity to others, including parents or guardians and other school staff unless legally required to do so.”

As I wrote in 2020, “In the Madison school district, a child could go to school as a girl named ‘Lindsay,’ but spend the day as a boy named ‘Liam.’ The child could go to the restroom alongside boys, change in the locker room with boys, and be known by friends and teachers as ‘Liam.’ But Lindsay’s parents, who gave birth to and are raising a girl named Lindsay, would have no idea.”

The fact that teachers were encouraged to keep a child’s gender identity struggles secret—as if the parents are the enemy and have no natural and legal right to this information—and that the district sneakily worked around a specific federal law banning this kind of secrecy is reprehensible.

The complaint describes the unethical policy thusly: “Parents’ rights cases have established that parents have the primary role in directing the upbringing of their children, especially in significant decisions (like health care), and that the government may not supplant parents simply because a parent’s decision is not agreeable to the child.”

Parental rights are the foundation of healthy families and a thriving society. School systems are but a tool to help educate children when parents are unable to do so themselves. Education should be the priority in this school district and all others. The priority should not be setting up illegal guidelines to keep vital information secret from parents or purposely encouraging kids toward concepts of gender fluidity.

Helping kids embrace or manifest a transgender-friendly persona through different attire, hormones, or changes in name and personal pronouns has replaced a school’s original goal: education. This is both wrong and misguided. Schools, parents, and kids should be allies, not foes. Hopefully, the Wisconsin Supreme Court agrees.