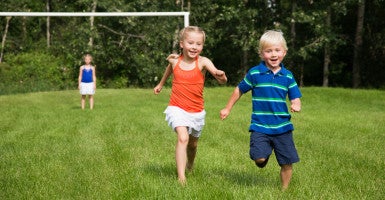 Update: According to The Seattle Times, “[t]he Mercer Island School District reinstated the game of tag following an outcry from parents” on September 25, 2015.

A school district in Washington state has banned tag, the popular game, because it’s too violent for today’s children.

School district officials told a local television station that students are told to keep their hands to themselves during recess.

“The rationale behind this is to ensure the physical and emotional safety of all students,” wrote school district spokeswoman Mary Grady in an email to Q-13 Fox in Seattle. “School staffs are working with students in the classroom to ensure that there are many alternative games available at recess and during unsupervised play, so that our kids can still have fun, be with their friends, move their bodies and give their brains a break.”

Kids who want some physical activity can sign up for one of the school district’s sports teams—and pay the accompanying $190 fee, which was just increased by $15 this year, according to the district’s website. But chasing your classmates around the playground during recess is officially off-limits.

That’s not sitting well with some parents, who believe that their children need a small break of unorganized playtime during the school day.

A Facebook group started by one parent who has two children attending district schools calls for “supporting Tag at recess.” It already has more than 430 members.

“I played tag,” said Melissa Neher, the woman who started the group. “I survived.”

Regardless of the benefits of games like tag, school districts everywhere are trying to cut down on kids’ social behavior at recess. There have been countless stories about schools banning dodgeball, while others have gone as far as banning any and all competitive activities. A school in New Jersey recently banned hugging, and a school in Ohio suspended a student last week for engaging another student in a “staring contest.”

It’s only a matter of time before they come for the swings too—oh, wait, they banned those in Richmond, Wash., already.

At least one school district has gone as far as instituting a blanket ban on any running at recess. Just sit there quietly and wait until we tell you to go back inside, kids.

Anyway, officials at Mercer Island School District say they will reconsider the ban on playing tag.

“It’s regretful that what seemed to be a well-intentioned desire to help protect kids has taken a life of its own,” Gay Plano, the district superintendent, told the Mercer Island Reporter.

What he really means, of course, is that he would have preferred for no parents to have made such a fuss about the new policy and allowed the school district’s nannyism to carry on unchecked.

So, “tag,” Mercer Island School District. You’re it. And by “it,” we mean that you’re the Nanny State of the Week.