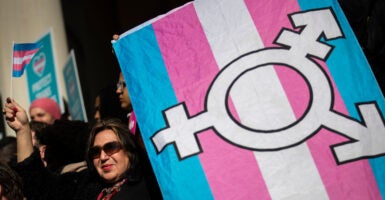 A judge tells a school district in Madison, Wisconsin, not to enforce a policy that kept teachers from informing parents when a student confides in them about gender identity issues. Pictured: LGBT activists rally on the steps of New York City Hall on Oct. 24, 2018. (Photo: Drew Angerer/Getty Images)

A state court in Wisconsin last week issued an order prohibiting a school district from intentionally deceiving parents about what their children are doing at school—especially if a child is struggling with his or her gender identity.

Dane County Circuit Judge Frank Remington intervened and issued an injunction Sept. 28 against the Madison Metropolitan School District, the second-largest school district in Wisconsin, with 27,000 students attending 52 schools. The injunction will remain in effect while the lawsuit that 14 parents brought against the district is on appeal.

In February, those parents sued the Madison Metropolitan School District with the help of the Scottsdale, Arizona-based Alliance Defending Freedom and the Milwaukee-based Wisconsin Institute for Law & Liberty, a right-leaning nonprofit public interest law firm. The Daily Signal reported on the case and subsequent developments in July.

In April 2018, the Madison school district quietly instituted a policy that not only promotes transgender ideology in the schools, but allows teachers to conceal pertinent information that students share.

Unfortunately, the latter part of the policy wasn’t about school-related issues such as a failing grade or a nasty spill in the hallway, but specifically about gender dysphoria–or a student’s desire to “identify with” the opposite sex–even if the child’s parents were unaware or disapproving.

Of course, the child could consent to teachers’ informing his or her parents of that, but if not, the policy instructed teachers to keep the information between them.

The judge was right to issue an injunction because the policy was unusually devious from the start. It was in no way ad hoc, accidental, or innocent: If a child approached a teacher about wanting to quietly transition to the other gender, the teacher was required to fill out a “Gender Support Plan.”

Under the federal Family Educational Rights and Privacy Act, parents can see all school records about their children, but the law excludes teachers’ personal notes from parental review. Thus, the school district instructed teachers to put any information about gender identity there, so parents would not be able to see the notes, even under federal law.

The district’s policy specifies: “School staff shall not disclose any information that may reveal a student’s gender identity to others, including parents or guardians and other school staff unless legally required to do so.”

That’s a blatant violation of parental rights, and it’s worth unpacking why it’s so egregious.

For starters, the policy itself likely took little time at all to implement. But now the case, Doe v. Madison Metropolitan School District, will linger in litigation, perhaps for years. It’s unfair, immoral, and unconstitutional for parents to lose their rights so easily and then have to spend years in court fighting for something that was already rightly theirs.

As I noted in a previous article reporting on this case: It’s hard to tell what’s worse here, that teachers are encouraged to hide a child’s secret transgender life at school behind the backs of concerned parents, completely subverting parents’ natural and legal right to this information, or that teachers essentially are encouraged to evade federal law to make this happen.

Parents pay substantial property taxes in most school districts for public school funding. That by itself should inform school policies about parental rights, not whatever social justice issue is currently popular and politically correct. That issue, right now, relates to transgenderism.

Most schools are open and transparent about what happens during the school day, and all of us know teachers who are more than happy to either brag on a child’s success or tattle on poor behavior. Yet somehow, this is not the case with this controversial, life-altering issue.

As Luke Berg, deputy counsel at the Wisconsin Institute for Law & Liberty, said in an email:

Parents should be able to trust that school staff will be open and honest with them about their kids. That shouldn’t require an injunction, but the district has refused to change its policy directing teachers to deceive parents.

The court’s order sends a clear warning to the Madison [Metropolitan] School District and to other schools with similar policies.

It’s disappointing that the second-largest school district in Wisconsin put this policy in place, defying normal parent-teacher procedures, and creatively finding ways to conceal the truth from parents about their child’s struggles with, or “decisions” about, gender identity.

It’s hardly a small issue, and it’s one that parents should know about immediately, if only so they can help get the child the therapy he or she needs.

The court is right to push the pause button on this policy until the lawsuit is resolved and, hopefully, parents’ rights in Wisconsin are fully restored.