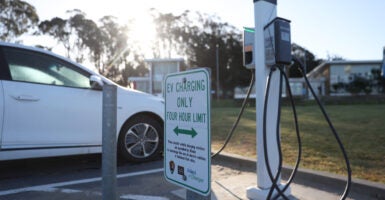 State lawmakers must reconsider whether or not it is in their constituents’ best interests to remain tethered to California’s increasingly extreme and costly emissions standards. Pictured: An electric vehicle recharges its battery at the East Crissy Field charge station on March 9 in San Francisco. (Photo: Justin Sullivan/Getty Images)

In a “let them eat cake”-style speech given last month, President Joe Biden suggested that if motorists switched to electric vehicles, they could spare themselves from high gasoline prices.

And while this claim itself may be dubious and indicative of how out of touch he is with real-world family budgets, at least he used the word “if,” suggesting that consumers should have a choice in the matter.

But soon, that choice could be taken away for many Americans if state lawmakers fail to take action. The long-time goal of the left is to ban the sale of vehicles with internal combustion engines in favor of electric vehicles. The total cost of vehicle ownership would rise substantially, while available consumer options will drop precipitously.

It is not widely known, but about one-third of all U.S. states are legally bound by their own prior actions to adhere to whatever “emissions standards” the California Air Resources Board puts in place, and California has already taken significant steps that will drive up costs of purchasing and operating a vehicle.

The same kinds of policies that have driven gasoline prices to $6 and $7 per gallon in the Golden State may be coming to a state near you—and it’s going to be much more costly than prices at the pump.

In 2020, with more than 40% of the EVs in America registered in his state, and believing that every state shares his “green” zeal, California Gov. Gavin Newsom issued an executive order to the California Air Resources Board that will phase out and eventually ban the sale of new internal combustion engines vehicles. Under the order, only zero-emission vehicles may be sold by 2035.

Motorists in all impacted states should be troubled by the nature of Newsom’s executive order. Lawmakers are essentially stripped of the right and responsibility to represent their own constituents in a manner that best reflects conditions in their respective states, while consumers would be deprived of more affordable vehicle purchase options.

These California regulations have the potential to ban the sale of traditionally powered internal combustion engines vehicles in all 16 states. In New England, New Hampshire (not beholden to the California Air Resources Board) would become the major beneficiary of this mandate, as New England residents and businesses would flock to the Granite State for its lower vehicle costs and larger array of options, crushing vehicle dealers in neighboring states.

But there is a way out of these self-inflicted wounds. By repealing statutory requirements to follow California’s increasingly costly standards, state lawmakers would save their own drivers by maintaining market demand levels of more and lower cost vehicle purchase options.

In early March, my organization, the RI Center for Freedom and Prosperity, signed onto a coalition letter along with organizations from 14 of the 16 impacted states.

Led by the Massachusetts Fiscal Alliance, we also conducted a press conference with five other New England states, calling on our state legislatures to decouple our “emissions” policies from the increasingly radical and costly standards that California is setting.

Significant discrepancies exist between extreme California-type emission reduction plans and the problems they would produce in other states.

Unlike California, about two-thirds of the 16 impacted states deal with harsh winter months that produce heavy snowfalls. Newsome’s ban would eliminate the option of powerful and reliable internal combustion engines vehicles specifically designed for these conditions, as opposed to electric vehicles that do not perform well in cold-weather climates.

Think of the inanity of electric-powered, heavy-duty snow-plow trucks, without the power to push tons of snow—while also requiring a multi-hour recharge session, multiple times per day, in contrast to a five-minute gasoline fill-up.

EVs for consumer use also suffer from limited suggested mileage ranges per year. This means that they are better suited as a second around-town vehicle, an expensive one at that, and are not likely to perform well as the family or commercial workhorse vehicle.

Most importantly, if state lawmakers fail to take action, vehicle purchase prices will soar, while passenger safety will plummet. The manufacture of EVs and zero-emission vehicles is a far more expensive process, generally increasing purchase prices by tens of thousands of dollars per vehicle, if not more.

On top of their very high purchase prices, also to be factored in is the “electricity” cost of charging EVs and the purchase and installation of a home charging station, which can amount to another multi-thousand-dollar expense.

And, according to ValuePenguin insurance, EV models are about 23% more expensive to repair and insure as compared with internal combustion engine models, not to mention the significantly higher cost of replacing an EV battery.

Today, only the most affluent Americans can afford EVs. Even with government subsidies, it is difficult to imagine how low-middle-income families could ever afford to comply with these EV mandates.

Also, high fuel-efficient and electric vehicles normally use significantly lighter weight materials, meaning they are far less likely to sufficiently protect passengers in the event of a crash.

With inflation at a 40-year high, supply chain delays, and COVID-19 still impacting everyday life, it is clear that real-world events have put enormous financial and health strains on much of our population. The theoretical fears over global warming are not a top-of-mind concern for most citizens, according to most polls. These costly California vehicle bans are the wrong idea at the wrong time.

Further, these California Air Resources Board EV mandates are highly regressive in that they would harm lower-income and rural residents much more significantly than their more affluent urban and suburban peers.

People drive out of necessity. Higher vehicle costs would have to come out of other areas of household budgets, leading to difficult choices for families already struggling to make ends meet.

It will also mean that small businesses that transport goods or provide remote services will have higher operating costs. Those increased expenses would ultimately be passed along to consumers through higher prices, putting even further upward pressure on inflation, as America is currently seeing via increased grocery item and other product prices.

Now is the time for lawmakers to give motorists a break by decoupling their states from California’s harsh emissions regime and its vehicle bans.

Such foresight would demonstrate that public officials put the well-being of their constituents ahead of an unachievable environmental agenda pushed by extremist advocacy groups and unelected bureaucrats—who live in another state.

It is not government of, by, and for the people to be beholden to one-size-fits-all policies devised in another state, or by political decisions made decades ago.

In circumventing the local democratic process that reflects the unique circumstance of each state—via blind obeisance to California—these 16 states are defying the concept of state sovereignty.

State lawmakers must reconsider whether or not it is in their constituents’ best interests to remain tethered to California’s increasingly extreme and costly emissions standards. It is America’s design that each state should be free to craft its own policies.

And ultimately, in a free market approach, Americans should be allowed to choose what kind of vehicle or transportation option makes best sense for them—whether a conventional car, an EV, public transit, or something else. Expanded choices are welcomed, however, mandates that limit choice are highly offensive.