Why the Crisis in Yemen Matters to the United States 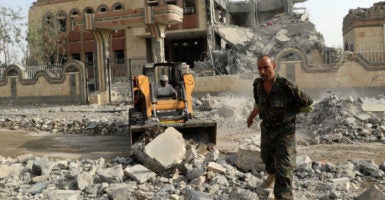 A police trooper walks outside a branch of Central Bank of Yemen destroyed by airstrikes in the northwestern city of Saada, Yemen. (Photo: Nair Rahma/Reuters/Newscom)

For years, Yemen has been one of the world’s poorest countries.

Today, its economy is on the verge of collapse, infectious disease is rampant, and competing factions pose an existential threat to the country. A civil war has left Yemen in what some are calling the world’s “largest humanitarian crisis to date.”

After the Arab Spring protests forced former President Ali Abdullah Saleh out of power in 2012, he joined with rebels supported by Iran to overthrow his successor, current President Abed Rabbo Mansour Hadi.

Hadi, forced into exile in Saudi Arabia, made a comeback after a Saudi-led coalition intervened to support his government in 2015.

Although there are many actors involved, three major factions are now battling for control of Yemen: the current Hadi government (supported by an Arab coalition led by Saudi Arabia), the Houthi and Saleh-aligned rebels (largely backed by Iran), and al-Qaeda in the Arabian Peninsula (a terrorist group).

As the Hadi government and Houthi rebels struggle for control, al-Qaeda in the Arabian Peninsula has capitalized on the instability and increased its presence and terror attacks. Other terrorist groups are also flourishing in Yemen’s chaos, including some who have pledged loyalty to the Islamic State.

In the midst of this brutal civil war and increased terrorism, Yemen’s civilians have withstood the worst of the conflict.

Here is a glimpse of just how devastating this war has been.

To put this situation into further perspective, consider that Yemen has a population of 27 million people. Approximately 18.8 million—69 percent of the country’s population—is in need of immediate humanitarian assistance.

Instability, security threats, and a lack of basic infrastructure have prevented aid organizations from helping.

The United States has an interest in not only helping to mitigate this humanitarian crisis but also to encourage a political settlement to end the war. What happens in Yemen could negatively affect regional stability and be disastrous for U.S. interests.

The fighting between the Houthi rebels and Hadi government is symbolic of a much larger struggle between Iran and Saudi Arabia. Iran sees this war as an opportunity to undermine Saudi influence in the Arab world and increase its own.

It is vital to U.S. interests that Iran’s influence be contained.

Yemen’s geo-strategic importance cannot be ignored either. The country borders two U.S. allies and sits at the convergence point of the Red Sea and the Gulf of Aden, overlooking the Bab el Mandab Strait—a key trade route, particularly for oil.

A daily 4.7 million barrels of oil are transported through that strait. At its most narrow point, the Bab el Mandab is only 18 miles wide, meaning that ships must pass closely together, usually only two at a time.

Serious disruptions of this route could constrict the flow of Persian Gulf oil to Europe and the western hemisphere and raise world oil prices.

Recent reports about Houthi rebel attacks against U.S. and other ships off Yemen’s coast have raised concerns about maritime security in the Red Sea.

As the war continues and Iranian influence grows, Tehran may seek to expand its leverage by escalating the potential threat to ships passing through the waterways.

The war has been devastating for Yemen’s civilians and regional stability. The U.S. can encourage a political settlement, but it will be up to the Yemenis and larger Arab world to see it into fruition.

Any settlement will also be impossible until Iran stops stoking the fire with its support for the Houthis.

However, without a solution to end the fighting, Yemen’s humanitarian crisis will only get worse.