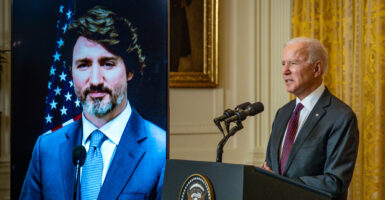 The Biden administration co-released the “road map” in the wake of tense trade relations between the Canadian government and the Trump administration.

Yet currently, the only renewal on the horizon is tit-for-tat retaliatory trade measures between the two governments.

In addition to raising other tariffs and duties on Canadian exports, the Biden administration has escalated North American trade tensions by defending the Democratic Party’s Build Back Better Act, which includes an electric vehicle tax credit scheme that would severely harm Canadian industries.

Early in his administration, Biden prioritized making wide-ranging upgrades to the U.S.-Canada relationship. Trudeau received Biden’s first call to a foreign government, and, not long after, Biden and Trudeau unveiled their joint “Roadmap for a Renewed U.S.-Canada Partnership.”

The economically focused “Building Back Better” provision of the road map acknowledges the importance of “international regulatory cooperation on enhancing economic competitiveness and well-being,” likely referencing the United States-Mexico-Canada Agreement.

Despite hope for change, highly valuable U.S.-Canada trade relations faced increasing strain throughout 2021, exemplified by tugs of war over lumber and milk.

Among many critiques, opponents view this provision as unfree and unfair. They claim the tax credit would disproportionately benefit the American automobile industry and potentially drive U.S. manufacturers to build factories and vehicles in the U.S. instead of Canada.

Canadian industries worry the tax credit will swing a sledgehammer at the Canadian automobile trade with its southern neighbor. Canada fears significant dents in trade representing billions of dollars yearly for the U.S. and Canada.

For related reasons, the Canadian government communicated clear opposition to the Build Back Better Act’s tax credits by placing the tax credits “at the top of Canada’s agenda with the United States.”

A Canadian bipartisan parliamentary delegation lobbied in Washington for the tax credit’s removal from the act, to no avail.

In November, Biden and Trudeau met to review progress on their “road map.” No progress on the “Building Back Better” plank of the road map was announced. Conflict over trade erupted yet again in December. Canada and Mexico filed a complaint through USMCA procedures, calling for an arbitration panel to evaluate potential violations of the USMCA made by Democrats’ proposed electric vehicle tax credits.

The panel is expected to be held sometime this month. The Canadian government has already vowed to slap “a number of sectors” with retaliatory tariffs to “defend its national interests.” Canada has committed to releasing a full list of American industries to be targeted by its tariffs sometime “soon.”

Given mounting trade tensions, time is running out for the Biden administration to rework its strategy toward Canada. American industries will soon pay the price for the administration’s trade policy decisions by carrying the weight of increased Canadian tariffs and duties.

If Biden truly wishes to “renew the U.S.-Canada partnership,” he must focus future phone calls, bilateral meetings and initiatives, and multilateral summits with the Canadian government on resolving the Build Back Better Act electric vehicle tax credit dispute, a giant thorn in the side of U.S.-Canadian relations.

Real improvement of U.S.-Canadian relations would require the United States to pull out the thorn by acknowledging and engaging the top priorities and concerns of the Canadian government.

Once the thorn is removed, the formidable U.S.-Canadian partnership can focus its efforts toward promoting mutual prosperity and countering shared threats.