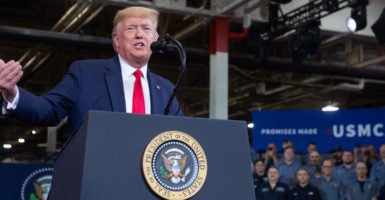 For more than 25 years, the North American Free Trade Agreement (NAFTA), which built the continent into one of the most efficient and competitive trade blocs in the world, has been the law of the land.

On July 1, rules for trade in North America will change with the United States-Mexico-Canada Agreement entering into force. USMCA hopefully will build on the success of its predecessor and lead to even greater trade between individuals in the region.

First and foremost, USMCA maintains the free-trade area that was established in 1994 with zero tariffs on nearly all goods trade among the U.S., Mexico, and Canada. That’s great news for Americans who have enjoyed the freedom to trade with their closest neighbors for more than two decades.

American dairy farmers will also benefit from greater access to the Canadian market.

USMCA makes huge strides in the areas of intellectual property protection and open digital trade. The agreement also bans data localization—a burdensome non-tariff barrier that requires data centers to be located in the same country where the data is collected—and protects source code.

One of the primary burdens to American businesses during the renegotiation of NAFTA was the uncertainty that the talks injected into the economy.

After President Donald Trump initially signed off on USMCA, a great deal of uncertainty persisted because Congress took more than a year to approve the agreement—and it made significant changes prior to approval. Trump signed the congressionally approved deal Jan. 29.

With USMCA now set to take effect, individuals and companies that engage in trade can have greater confidence that the rules will not change for the time being.

It’s unclear how confident businesses will be because USMCA has a 16-year lifespan and could be revised after six years. It’s possible for the agreement to be extended, but that kind of provision is new for a trade agreement, and there remains some concern about the effects it will have on investment.

Similarly, automakers in North America are still working to develop transition plans to conform to new, more restrictive rules of origin while attempting to remain competitive.

Thankfully, the Office of the U.S. Trade Representative granted those companies an additional six months to transition to meet the new rules and save automakers from paying tariffs on imports during that time.

The agreement should also allow for more efficient state-to-state dispute settlement, a function that existed under NAFTA but was rarely utilized.

U.S. concerns regarding biotechnology products are expected to be one of the first imports disputed using this mechanism. U.S. Trade Representative Robert Lighthizer also told congressional committees in mid-June that he expects to utilize USMCA’s special labor dispute system “early and often.”

While some uncertainty persists regarding the intricacies of USMCA rules and implementation, the pact’s debut undoubtedly marks the continuation of the status of the region as one of the freest trade blocs in the world.