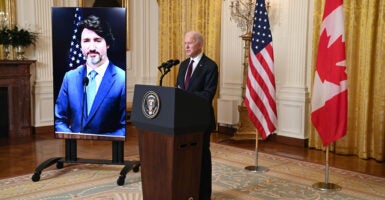 Borrowing and reciting each other’s political catchphrases—“America/Canada is back” and “Build back better”—the two politicians talked about their priorities, among them fighting climate change and racial inequality.

Their joint statement, billed as the “Roadmap for a Renewed U.S.-Canada Partnership,” noted that “[i]t is in the shared interest of the United States and Canada to revitalize and expand our historic alliance and steadfast friendship to overcome the daunting challenges of today and realize the full potential of the relationship into the future.”

Indeed, sharing the world’s longest unmilitarized border, the people of the United States and Canada are closely bonded in a relationship that is dynamic. It’s only natural that the two countries’ governments collaborate closely on critical economic and security issues.

The temporary closing of the U.S.-Canada border to nonessential traffic might have been prudent in response to the ongoing global health crisis, but it needs to be reopened as soon as possible. The free circulation of ideas, goods, people, and capital between the two countries is vital to the well-being of both.

The fact is that the U.S. and Canada have a long history of institutionalized high-quality cooperation on a range of critical issues.

With the economies, societies, and infrastructure of the U.S. and Canada so closely intertwined, policymakers in both countries must ensure that trade and travel remain as open as possible, consistent with ensuring the two nations’ public health security.

As The Heritage Foundation’s annual Index of Economic Freedom highlights, policies and governing systems that promote freedom—whether through improvements in the rule of law, the promotion of competition and openness, or suitable restraints on the size and economic reach of government—enable practical solutions to a wide range of challenges that confront the world.

Over the past decades, the United States and Canada, two dynamic free-market democracies, have stood together near the top of Heritage’s index as mostly free economies, with their competitive economic freedom ratings well above the world average.

Economic freedom—which is the backbone of free, transparent, and dynamic market systems that have underpinned the two allies’ dynamic partnership—matters more than ever during the ongoing battle against the coronavirus pandemic, and more critically, to enable a sharp, timely economic rebound together.

Needless to say, the impact of the ongoing coronavirus pandemic on the world and the North America region has been far-reaching and hugely disruptive in terms of scale and velocity. It must not, however, be allowed to weaken or undermine the U.S.-Canada bilateral relationship, which is at the very heart of the economic vitality of the region.

Uncertainty is undeniably the biggest threat to businesses of all sizes right now.

As a practical matter, it’s imperative to remove uncertainty caused by lingering protectionism in order to spur economic growth and reinvigorate supply chains in the region.

The removal of protectionist policies would not only benefit both countries’ economies in the long term, but also help speed the recovery by stimulating entrepreneurial economic dynamism in the two allies.

The positive rhetoric aside, all is not necessarily rosy in the U.S.-Canada relationship.

Mr. Biden promised a new era of cooperation and openness with other countries. Instead, he has used Canada as a punching bag.

In this era of frayed international relationships, rising unemployment and struggling industries, it is more important than ever to allow people to trade with each other without asking a bureaucrat’s permission.

Further enhancing the longtime bilateral relationship is vital for Washington and Ottawa at the best of times. However, that’s even more essential now as a practical means to ensure an economic rebound, led by the private sector, on both sides of the border.

Unbundling shortsighted protectionist policies must be the first step of realizing the road map for a renewed U.S.-Canada partnership.