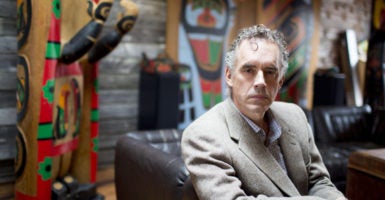 Some in the crowd cheered when Canadian Prime Minister Justin Trudeau corrected a woman’s usage of the word “mankind” to “peoplekind” — a word more politically correct, but not found in either the Merriam-Webster Dictionary or the Oxford English Dictionary.

Had he been there, Dr. Jordan Peterson, a Canadian clinical psychologist, would not have been one of those cheering.

“We like to say ‘peoplekind,’ not necessarily ‘mankind,’ because it’s more inclusive,” Trudeau said at a town hall meeting in Edmonton, Alberta, on Feb. 2, interrupting the woman, who had asked him about Canadian laws on volunteering with religious organizations.

Peterson weighed in on TV’s “Fox & Friends” on Tuesday on the prime minister’s interjection. Besides being a psychologist, he is a professor at the University of Toronto and a best-selling author.

Peterson has been an outspoken critic of the government compelling individuals to refer to others by their “preferred” pronouns and making it illegal to “misgender” someone.

An example of “misgendering” someone is the act of referring to a man who “identifies” as a woman as “him” or even calling a man “him” when he uses the artificial pronoun “ze.”

“It’s completely inappropriate of the government to decide which language the citizenry should speak,” Peterson said.

He described Trudeau as someone only capable of “running his ideas on a few, very narrow ideological tracks.”

The “most egregious example,” Peterson said, occurred when Trudeau assembled his Cabinet in 2015 and mandated that it be made up of 50 percent women and 50 percent men, despite the fact that only “about 22 percent” of the elected members of the Canadian Parliament are women.

“It was easier for him to do that than it was for him to screen people for the sort of competence that would actually be necessary to be Cabinet members,” he said.

When Trudeau, who took office in November 2015, was asked why he chose to make his Cabinet 50 percent women and 50 percent men, he replied, “because it’s 2015.”

“It’s quite the performance,” Peterson said. “I think we’re really going to pay for it in Canada in ways that we can’t yet imagine.”

The headline of this article has been corrected to reflect the word Trudeau used.