Energy and Climate Regulations in California Are ‘Green Jim Crow’ 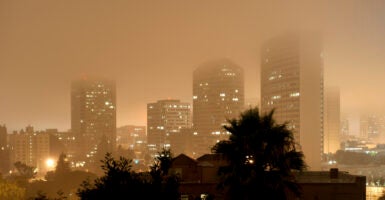 For decades, California has been viewed as a vanguard state, a province that leads America on things like entertainment, fashion, and politics. No longer.

Instead, California has become a state to be rebuked, a place where a small group of regulators and politicians—with the full backing of the state’s powerful environmental groups—have created “a new Green Jim Crow era,” where “racist climate housing policies are strongly linked to its racist climate transportation policies.”

That’s the gist of a scathing essay by Jennifer Hernandez in the latest edition of the Breakthrough Journal, a periodical published by the Oakland-based Breakthrough Institute.

It’s no coincidence that Hernandez’s essay reads like an indictment. Hernandez is a lawyer. She’s a partner at Holland & Knight and the lead lawyer for The Two Hundred, a group of Latino leaders who have sued the state of California over its climate, housing, and transportation policies.

In 2019, she and The Two Hundred filed a 250-page civil rights lawsuit suit that claims: “Entrenched special interest groups, including environmentalists, block meaningful housing policy reforms” and that the state’s housing crisis is “resegregating the state, and is deepening an already severe civil rights crisis.”

Hernandez has become one of the most prominent and credible critics of what she calls California’s “unbelievably regressive” climate and energy policies. In her essay, Hernandez recounts her childhood as “the daughter and granddaughter of steelworkers.” She grew up in Pittsburg, California, “a gritty industrial town on the outskirts of the San Francisco Bay Area.”

Her father’s job at U.S. Steel, she writes, “allowed us to live in the ‘middle’ class.” At 17, she won “our nation’s closest equivalent to a national lottery with full scholarships to Harvard, and then to Stanford Law.”

But at about the same time she began practicing law, her father lost his job and most of his pension. The saving grace, she writes, was that her parents “owned their home … Owning a home isn’t just a place to live: it’s the American Dream, our nation’s most successful pathway for elevating working families to the middle class.”

Hernandez’s essay provides additional proof of the growing split between California’s black and Latino populations and the state’s Democratic politicians and regulators who dance to the tunes played by the Sierra Club, the Natural Resources Defense Council, and other “green” groups.

Over the past two decades or so, California has enacted a labyrinth of regulations, taxes, and subsidies that are driving up the cost of housing, energy, power, and transportation in a state that is already struggling due to its high cost of living and acute shortage of affordable housing.

Expensive energy has a particularly regressive effect in California, which has the highest poverty rate—and some of the highest electricity prices—in the country. Last year, California’s electricity prices jumped by 7.5%, making it the biggest price increase of any state in the country and nearly seven times the increase that was seen in the United States as a whole.

Californians are now paying about 70% more for their electricity than the U.S. average and the state’s electricity rates are expected to go even higher over the next decade.

To be sure, Hernandez isn’t the first to criticize the state’s regulators and environmental groups over climate policies. Last year, Assemblyman Jim Cooper, a Democrat from the Sacramento area, published a letter in which he accused the state’s “green” groups of promoting policies that “systematically drive racial inequities and fuel environmental racism.”

Also last year, Cooper and Assemblywoman Blanca Rubio, a Democrat from the Los Angeles area, blasted the groups who are promoting bans on natural gas. In 2019, Berkeley, California, became the first city in the United States to pass a ban on natural gas hookups in new buildings. (Hernandez lives in Berkeley.)

According to the Sierra Club, which is actively promoting the bans, 49 cities in the state have adopted building codes that restrict or ban the use of natural gas. In a letter to the California Public Utility Commission, Cooper and Rubio said,

The growing ‘ban natural gas’ chorus from organizations such as the Sierra Club, the Environmental Defense Fund and Union of Concerned Scientists to name a few, has become more aggressive, and there has never been a mention by them about what the cost impacts would be on customers who are struggling with utility costs, and household expenses.

In her essay, and The Two Hundred’s lawsuit against the California Air Resources Board, Hernandez spotlights the importance of affordable housing and how the state’s new rules on vehicle miles traveled will further segregate the state and make housing even more expensive.

In her essay in the Breakthrough Journal, she published two maps, one of them dating from 1937, which show how historical redlining—that is, the areas that could be inhabited by blacks and other minorities—are very similar to the Bay Area regions that are now being targeted for the vehicle miles traveled rules. She explains that in San Diego County, the state’s vehicle miles traveled reduction mandate could “increase the cost of each home between $50,000 and nearly $700,000.”

Last year in Fresno, a city where black and Latinos make up 60% of the population, Hernandez explains that city staffers estimated that imposing the vehicle miles traveled mandate could “add at least $23,000 to the cost” of new houses. Despite that fact, Fresno’s City Council “dutifully imposed the mandate by a vote of 5-1.”

Hernandez concludes her essay by saying that California must “stop pretending” that it can meet its energy needs with solar, wind, and batteries “while the state closes its last nuclear plant and continues to grant license extensions to its dirtiest gas plants.” She goes on, “we are long overdue to reconsider California’s racist, inequitable and ineffectual climate agenda.”

In a telephone interview on Wednesday, Hernandez told me she is proud of the essay and the reaction it is getting. She added that while she loves California, the notion that the state’s climate policies “are being exported to Washington, D.C., is terrifying. California regulators want the rest of the country to buy these policies. But look at what they have done to us.” She added, California has “betrayed its people. It’s a broken society.”

This article originally appeared in RealClearEnergy.