California and the West Burn Again 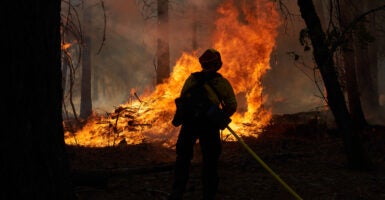 A fire crew defends property as the Dixie Fire pushes through the Genesee Valley in California on Aug. 21. (Photo: Allison Dinner/Getty Images)

Another dry, late summer in California, another year in which the state burns and towns get incinerated.

Large, out-of-control fires have become a yearly occurrence in the Golden State. The fires may be so bad in 2021 that they run straight through the dry season and up until December, according to the U.S. Forest Service.

While the California fires get the most attention and have caused the most destruction, the giant forest fire problem has been hitting most of the Western states ferociously hard in recent years.

As usual with what should be an unexpected occurrence at this point, many are quick to pin this somewhat recent phenomenon on climate change. Certainly, a hotter environment creates more severe fire conditions. But the reason why large parts of the West have become so susceptible to huge blazes is the other crucial element in starting fires: fuel.

Pinning this on climate change may be politically convenient for many on the left, but it’s clear that it doesn’t fully explain the surge of Western fires.

It’s impossible to ignore the near half-century mismanagement of public land by the state and especially the federal government. In a misguided attempt to be more environmentally conscious, politicians and government agencies created a catastrophe.

When former President Donald Trump made this point, he was attacked and mocked. But Trump was right and his critics were wrong.

As I’ve written about in years past, the Forest Service made some dramatic changes in land management practices starting in the 1970s. While not all land management policies of the early 20th century were good or successful, there was at one time a greater emphasis placed on actively clearing forests of trees and clearing dead, dry material on public land.

Since that time there has been a steady uptick in the size of fires, culminating in the massive, apocalyptic ones we see today.

California’s Dixie Fire has so far destroyed more than 1,000 buildings, 500 homes, and has covered more than 2,000 square miles, according to The Associated Press. It’s the largest fire in California history.

And it’s just one part of the mosaic of fires hitting the state in 2021.

“Through Thursday, fires tracked by Cal Fire and the U.S. Forest Service had burned 1,470,637 acres—far surpassing the 920,165 scorched through that date in 2020,” the New York Post reported.

And because more people are likely to live in areas susceptible to these fires today, in part because of the high cost of living in California’s urban center, this means there is a significant toll on property and life as a result.

Large parts of the West, especially California, have always been susceptible to drought and dry conditions. That’s not new. What has changed is the policies dealing with them.

“Once upon a time the U.S. Forest Service’s mission was to actively manage the federal government’s resources,” explained The Wall Street Journal in 2018. “Yet numerous laws over the last 50 years, including the Endangered Species Act and National Environmental Policy Act, have hampered tree-clearing, controlled burns, and timber sales on federal land.”

This was the wrong way to go, as it has become clear that active land management turns out to be better for people and the environment in general.

Perhaps ironically, the environmentalist move away from forest management has ended up not only doing severe damage to life and property, but has also hurt the environment. For those concerned about climate change, the towering infernos in the West cause far more carbon emissions than automobiles.

Even the left-leaning Los Angeles Times has acknowledged that there is a lot of evidence that clearing the forests is an important way to deal with the yearly fire crisis:

Forest management has long been touted as essential to fighting wildfires, with one new set of studies led by the University of Wisconsin and the U.S. Forest Service concluding that there is strong scientific evidence to support the effectiveness of thinning dense forests and reducing fuels through prescribed burns.

Certainly, there are positive examples of small-scale entities taking control of managing their local forests. Some Native American tribes have effectively managed their land by harvesting old growth and timber.

Some environmental policy experts have even advocated the creation of “charter forests” that would—much like charter schools—be publicly owned but privately run to do a better job of taking care of vast swaths of land currently lying fallow.

The advantage of having local entities take over forest management is that they can quickly respond to the unique needs of their forests. Large federal agencies like the Forest Service, on the other hand, often move at a glacial pace at best even when a change is desperately needed.

In 2019, even California Gov. Gavin Newsom, a Democrat, said he would begin to invest more in fire prevention in his state, and hashed out a deal with Trump to partner with the federal government to do so.

Unfortunately, a report by CapRadio accused Newsom of misleading the public and revealed that little has been done to fulfill the deal.

When the deal was made, Newsom said the state “fundamentally has to change” in how it approached the huge fires. It appears little if anything has changed.

The problem in California and throughout the West is enormous. A half-century of poor management will be difficult to undo. But failing now will leave future generations at the mercy of these fires and little to build on but soot and ashes.