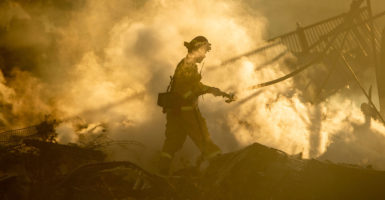 A firefighter sprays down the smoldering remains of a burning home during the Hillside Fire in the North Park neighborhood of San Bernardino, California, Oct. 31, 2019. (Photo: Josh Edelson/AFP/Getty Images)

Editor’s Note: Fire season has become extreme and destructive in California as the state has been hit with numerous infernos and now power outages.

In 2018, in the wake of a massive fire in Northern California, President Donald Trump said that land management has been a contributing factor to the blazes.

As Jarrett Stepman wrote in 2018, misguided land management has been a huge reason for the uptick in large fires in California. Here’s Stepman’s original article.