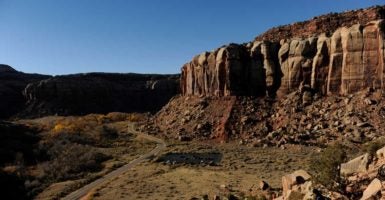 President Donald Trump has taken an important step in curtailing the oversized federal footprint in the Western states.

On Monday, Trump announced that he will substantially reduce the area of Bears Ears and Grand Staircase-Escalante national monuments in Utah.

President Barack Obama had used the Antiquities Act of 1906 to set aside 1.35 million acres of land for the Bears Ears monument in Utah at the tail end of his presidency, a decision that was hotly contested. Bears Ears was designated as a national monument by the Obama administration in 2016.

Trump will cut Bears Ears to 220,000 acres and Grand Staircase-Escalante, originally created under President Bill Clinton, to about 1 million acres, half its current size.

“With the action taken today, we will not only give back your voice to use of the land, we will also restore your access and enjoyment,” Trump said in a speech in Salt Lake City. “Public lands will once again be for public use. Families and communities of Utah know and love this land the best, and you know the best how to take care of your land and how to conserve this land for many generations to come.”

Trump said it’s time to question the idea that natural resources should be “controlled by a small handful of very distant bureaucrats located in Washington.”

Utah legislators blasted Obama’s use of the Antiquities Act as an overreach of unilateral executive authority.

The law states that the area designated as a monument by the executive “shall be confined to the smallest area compatible with proper care and management of the objects to be protected.”

However, in an editorial for The Daily Signal, Sen. Mike Lee, R-Utah, wrote, “[P]residents have ignored this important qualifier in the past, locking up millions of acres that could be managed as multiple use.”

Trump’s decision could provoke a court battle over the scope of the Antiquities Act and the ability of presidents to overturn previous orders.

Antiquities designations have stripped economic opportunities away from communities. Whether the issue is logging, recreation, conservation, or energy development, these decisions should be made at the local level, not from Washington.

While Obama’s decision was celebrated by environmentalists and Native American groups, others opposed it. Polls show that Utahans were generally against the land grab.

The majority of Utahns support @POTUS and his decision to reduce the massive size of #BearsEars and #GrandStaircase. #utpol pic.twitter.com/gM8mE3vQtx

The Champion of Western Development

The fight over land certainly has a long Western tradition.

For centuries, local and state governments and private citizens have battled with federal authorities over land usage.

Thomas Hart Benton, a prominent 19th-century senator from Missouri, became an early champion of releasing public land to private ownership as quickly and expediently as possible.

In his book, “Thirty Years’ View,” Benton argued that getting land into private hands as quickly as possible would be a boon to individuals and the economic improvement of the nation.

Benton wrote that while the Eastern states had greater control of their own land and quickly developed it, the Western states were choked off from this essential aspect of their growth.

Of the Western states, Benton wrote: “The federal government held the primary disposition of the soil; and the majority of Congress (being independent of the people of these States), was less heedful of their wants and wishes.”

The federal government held nearly a monopoly on this land, and, Benton wrote, “this monopoly, like all monopolies, resulted in hardships to those upon whom it acted.”

By Benton’s reasoning, private ownership of land leads to better stewardship and maintenance than any far off government could ever accomplish.

Lessening this control could provide a boon to local economies, job creation, and ultimately, tax revenue. This is important to note in regard to Bears Ears, which is located in the poorest county in Utah.

While preserving national parks and places of great cultural significance in America’s wilderness is a worthy and important goal, allowing the government to overstep its proper bounds and choke off regional development does a disservice to states and their residents, who can greatly benefit from additional access.

But diminishing federal control of Western land will have other, noneconomic benefits as well.

Poor management of public lands and forests has exacerbated the massive wildfires, which have increased in scope over the past 40 years.

Putting these lands under state, local, and perhaps even partially privatized control could aid in curtailing those blazes, which have taken a massive toll on life and property.

It’s a mistake to think the federal government is the best—or even the only—way to protect and maintain land, either for economic development or preserving natural beauty. There are certainly better and less disruptive ways to be good conservationists of natural resources.

As a study by the Salt Lake City-based Sutherland Institute, a public policy think tank, demonstrated, setting aside massive national monuments has put many areas under an increased chance of destruction, because the government simply can’t keep up with the demands of maintaining the land.

Reducing the size of Bears Ears is a step in the right direction, but more needs to be done to reduce the burdensome federal control that has led to poor land management, angry locals, and stunted growth for large swaths of this country.