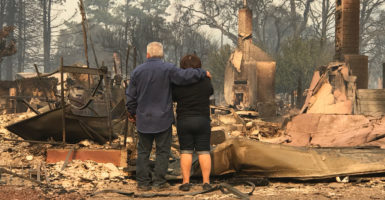 A fire devastated the city of Santa Rosa, California, in October. This is just one of many fires that have hit the West over the past year. (Photo: Cierra Davis/newzulu/Newscom)

Editor’s Note: In response to the deadly Carr Fire in Northern California, many in the media have advanced the narrative that it is the result of climate change. However, this misses the ongoing problem of poor forest management which has led to larger fires throughout the West. The following story was published in the wake of the devastating Tubbs Fire.

The massive fires that took the lives of over 40 people in California were not the only devastating wildfires as of late.

Utah, Montana, and other states have been hit by destructive infernos that have left death and widespread property damage in their wake.

Forest fires—what firefighters call wildland fires—are undoubtedly a part of nature and can never be stopped entirely, but the measurable uptick in extraordinarily large fires is a trend that is causing intolerable amounts of damage.

Forest management policy has become calcified and centralized over the last half century, but there are some serious ideas that can turn things around.

Since the 1970s, the number of forest fires in the United States has remained fairly constant, but there’s been a significant uptick in the size of these blazes. The average wildfire is now twice the size of fires of 40 years ago.

Some have tried to pin the blame on climate change, but as a 2015 Reason Foundation study noted, climatic factors like higher temperatures and increased droughts “cannot explain the pattern of fires observed over the past century.”

“While it is possible that climate change has played a role in increasing the size of fires, the primary cause seems to be forest management practices, which have changed several times over the course of the past 200 years,” the study said.

The United States Forest Service, which manages most of America’s wilderness, made some big changes in the 1970s that many say have led to our modern predicament.

The selective clearing of forests, in which only certain trees are removed, had been highly successful in the past. But perverse incentives for the agency made clear-cutting, or uniformly chopping down trees, more common in the 1950s. This led to a backlash of lawsuits, environmentalist attacks, and unfortunately, more centralization in Washington for the Forest Service.

“In 1976 Congress tried to resolve the debate by instituting a comprehensive forest planning process,” wrote Randal O’Toole, a policy analyst at the Cato Institute. “The resulting plans proved to be a costly mistake: The agency spent more than a billion dollars planning the national forests, but the plans were often based on fabricated data, and they did not resolve any debates.”

Nearly a half century of bureaucratic centralization and environmentalist initiatives have left forests overgrown, vulnerable to fire, and dangerous to individual property owners and the economies of many states.

California state Sen. Mike McGuire, a Democrat, estimated that the recent fires may have caused over $3 billion in damages to his state.

There are simply no words to describe the sorrow. Initial damage assessments for unincorporated Sonoma Co are in: 3,819 destroyed parcels, $2.019 Billion. When Santa Rosa is combined, damage estimates top $3 billion. Unfortunately, estimates are expected to grow this week. pic.twitter.com/tplJC9euCh

California’s fires have gathered most of the media attention, but other Western states also have suffered immensely from out-of-control wildland fires in the past few years.

A large fire near the town of Brian Head, Utah, burned 13 homes and over 93 square miles of land.

Utah state Rep. Mike Noel, a Republican, along with other Utah legislators and officials, made a short video in October explaining how better forest management could have prevented what became the most expensive forest fire in the state’s history.

In the video, they say the buildup of dead trees caused what should have been a small brush fire to balloon into something much worse. The video notes at the end:

The [United States Forest Service] and the [Bureau of Land Management], like helpless giants, are constrained by a self-imposed web of bureaucratic rules and regulations that impede and stop proper management options that could reduce these large catastrophic fires.

Now Congress is working on measures to stop the bleeding of an increasingly unmanageable problem.

The House recently passed a bill that would allow more aggressive tree clearing and local collaborative organizations to have more control of public land. It would also redirect funds from fighting fires to preventing fires, correcting what has become a major budgetary imbalance over the past few decades.

What is clear is that, unlike the effects of many other natural disasters, there are proven ways, such as aggressively limiting overgrowth and clearing dead wood, to control the effects of wildfires and contain their damage.

Previous generations more effectively dealt with the problem, and federal and state policymakers would be wise to emulate and improve on what they did as we come up with our own innovative solutions.