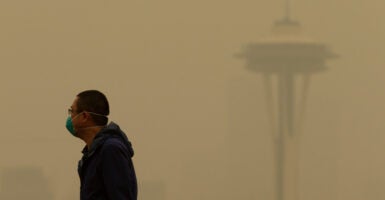 A man wearing a mask walks in Kerry Park as smoke from wildfires fills the air on Sept. 12 in Seattle, even obscuring the landmark Space Needle. The air quality there was at "unhealthy" levels after a large smoke cloud from wildfires on the West Coast settled over the area. (Photo: Lindsey Wasson/Getty Images)

Chandler Hubbard is a student at the University of Alabama at Birmingham and a member of the Young Leaders Program at The Heritage Foundation.

This has been a trying year for millions of Americans as a pandemic continues to threaten people’s lives and livelihoods, and a devastating wildfire season in the western United States only made matters worse.

Tragically, those wildfires have taken lives and destroyed homes, businesses, and wildlife in the process.

While better forest management and wildfire mitigation are multifaceted, one place to look for successful guidance is Native Americans. More on that in a moment.

There are many factors that contributed to the increased acreage burned, including fewer prescribed burns, less timber harvesting, a hotter and drier climate, and housing policies that encourage people to live in more wildfire-prone areas.

An overarching challenge to reduce the size and strength of a forest fire is to reduce the fuel load, which is burnable biomass, such as grass, pine needles, shrubs, and fallen trees.

Historically, one policy that contributed to additional fuel load is the Forest Service’s 10 a.m. rule, which stipulates that any fire must be suppressed by 10 a.m. the day following its discovery. That rule made sense in concept, but led to suppressing many small fires that would have helped reduce the fuel load in the forests.

As the Forest History Society notes, “during the 1960s, scientific research increasingly demonstrated the positive role fire played in forest ecology,” which led to the abandonment of the 10 a.m. rule in 1978.

Some of the residual effects of the rule remain in place today, however, and have been exacerbated by red tape that restricts the ability to perform controlled burns and to harvest timber.  As a result, the Forest Service estimates an 80 million-acre backlog in clearing and restoring high-risk timber plots.

The benefits of more effective management speak for themselves, and there are many examples of good stewardship in action.  Take the Colville Tribes in the state of Washington, for instance.

With this much land in northeastern Washington, forest fires are a great risk to the people who are in control of management and have employed many successful practices.

In an interview, Todd Myers of the Washington Policy Center, a free market think tank in Washington state,  spoke with the natural resources manager of the tribes, Cody Desautel, who revealed the strategies that the tribe employs in managing the forests.

Those strategies are not unique to Colville, but instead represent the ability of Native American tribes to understand their history and continue that management today.

The Colville management techniques include:

While those ideas seem like simple commonsense, Desautel says that government bureaucracy and environmental activism often stand in the way of progress.

Regulation also presents a major obstacle to reducing the fuel load. Prescribed burns go through a lengthy approval process. Securing a permit can take up to 18 months, and the burns are subject to the National Environmental Policy Act and must meet federal, state, and local air-quality standards.

As Holly Fretwell of the Bozeman, Montana-based Property and Environment Research Center wrote, “the best way to reduce wildfire risk today isn’t to leave trees alone, but to selectively harvest in ways that harness technological innovation and create co-benefits.”

Improved forest health and restoration will necessitate cooperation and commonsense policy reforms among the federal government, state and local governments, and the private sector.

As demonstrated by the Colville Tribes (and others), active management provides economic opportunity, improves the health of forests, and reduces the risk of wildfires.

Removing unnecessary barriers to active forest management should be a priority for federal and state policymakers heading in 2021, so that we can reduce the risk of having another year like 2020.