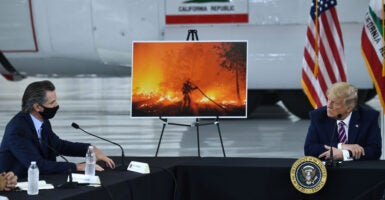 “I want to thank you and acknowledge the work that you’ve done to be immediate in terms of your response to our requests,” Newsom, a Democrat, said in meeting on the wildfires with Trump, a Republican, and other federal officials during a briefing at the Sacramento McClellan Airport in McClellan Park, California.

“This may be a record that the state has received in the [fire management assistance grant] support, as well as the major disaster declaration, which you referenced on Aug. 22, which was profoundly significant, not only to help us support our mutual aid system, but also individuals that are in desperate need of support,” the California governor added.

Trump and Newsom were joined by federal, state, and local emergency management officials.

“I know we come from different sides of the planet, but we actually have a good relationship. Good man,” Trump said of Newsom during their meeting, according to pool press reports.

“It’s a big problem, and it will get solved,” the president said of the wildfires. “We say, ‘God bless you’ to those who were killed in this serious fire. We are showing and giving support to the people of California.”

“We’ve known each other too long, and the working relationship, I value,” Newsom told Trump, as he built a case for blaming climate change for the wildfires, adding:

We feel very strongly the hots are getting hotter, the dries are getting drier. Something has happened to the plumbing of the world,  and we come from a perspective, humbly, that we assert the science that climate change is real. Please respect the difference of opinion out here with respect to the fundamental issue of climate change.

But when another speaker mentioned climate change and that science disagrees with the president, Trump said: “It will start getting cooler. … Just watch. I don’t think science knows, actually.”

Newsom said 56% of the land in California is federally owned, and pressed Trump on the federal government’s responsibility for better forest management.

“It’s good to have you back in the state,” Newsom told Trump, before explaining the severity of the wildfire problem:

We’ve got fires all the way at the border of Oregon, all the way down to the border with Mexico; 2.8 million acres just in the last 30 days have burned—3.2 million over the course of this calendar year.

We can agree to disagree on the politics of this, but let me just acknowledge two things briefly: There’s no question … that we have not done justice on our forest management. I want to thank you for supporting that effort.

Trump praised all those involved in combating the fires.

“I want to thank all of the FEMA people for doing a great job. And thank you to Gavin Newsom, acting DHS Secretary Chad Wolf, and all of the people joining us today.”

After the event Trump delivered remarks in McClellan Park during a ceremony in which he awarded the Distinguished Flying Cross to seven members of the California National Guard for their rescue efforts Sept. 5 during the wildfires.