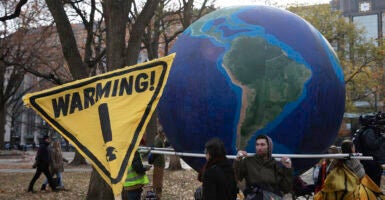 Since publication of the last Mandate for Leadership, the Trump administration scrapped the climate agenda of the Obama administration, which would have driven up energy bills on American families for no meaningful impact on global temperature.

The U.S. Environmental Protection Agency replaced the Clean Power Plan with the Affordable Clean Energy Rule and revamped New Source Performance Standards to allow new coal-fired power plants to compete in the market, and the president has announced his intention to withdraw from the ineffective Paris climate accord.

The Interior Department revised methane regulations for oil and gas operations on federal lands, and ended the previous administration’s ban on coal leasing on public lands.

Through executive order, the administration disbanded the Interagency Working Group estimating the social cost of carbon and directed agencies to stop using the Obama-era cost estimate of more than $40 per ton of carbon dioxide. In its regulatory impact analysis of the Clean Power Plan, the Environmental Protection Agency lowered the social cost of carbon figure to between $1 and $6 for 2020.

The current administration has taken productive steps to reduce the previous administration’s regulatory climate tentacles, however, policymakers could do more.

The integrated assessment models are unreliable, and policymakers would be wise to prohibit their use. Withdrawing from the Paris climate accord was a bold step toward climate leadership because international climate efforts have been wasteful and unproductive. Recognizing this, the administration should withdraw from the entire United Nations Framework Convention on Climate Change.

As long as the endangerment finding exists, future administrations will be able to implement more stringent climate regulations on American families and households.

Revisiting the endangerment finding and creating a “Red Team/Blue Team,” as proposed by Steven Koonin, undersecretary for science in the U.S. Department of Energy during President Barack Obama’s first term, would be a productive step.