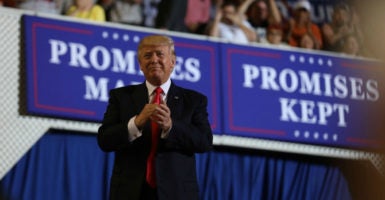 President Donald Trump promised during the campaign to withdraw the U.S. from the Paris Agreement, which sets out to limit the rise in global temperatures. (Photo: Carlos Barria/Reuters/Newscom)

President Donald Trump has promised to make a “big decision” in the next two weeks on the Paris climate accord after promising to “cancel” the agreement during the campaign last year.

Fundamentally, the Paris Agreement is a costly and ineffective approach to addressing global warming. There are compelling economic, environmental, and legal reasons for Trump to make good on his campaign promise, and the commonly heard arguments for remaining in the agreement do not pass muster.

The Paris Agreement, signed by more than 170 countries, aims to limit global warming to 2 degrees Celsius above pre-industrial levels.

The means of accomplishing this goal largely center on reducing carbon dioxide emissions by transitioning the global energy economy away from affordable, dependable conventional sources of energy.

Countries involved in the agreement each submitted nationally determined contributions, setting their respective obligations for keeping temperatures in check.

The U.S. regulations alone would increase energy costs for U.S. families and businesses, causing an overall average shortfall of nearly 400,000 jobs and total income loss of more than $20,000 for a family of four by the year 2035.

Compliance with the Paris Agreement will cost the global economy trillions of dollars over the next 80 years. Yet the results will be almost zero reduction in projected warming, even if every country met their respective carbon dioxide reduction targets as promised under the agreement.

Even former Secretary of State John Kerry made some revealing claims regarding the ineffectiveness of Paris:

The fact is that even if every American citizen biked to work, carpooled to school, used only solar panels to power their homes, if we each planted a dozen trees, if we somehow eliminated all of our domestic greenhouse gas emissions, guess what—that still wouldn’t be enough to offset the carbon pollution coming from the rest of the world. If all the industrial nations went down to zero emissions—remember what I just said, all the industrial emissions went down to zero emissions—it wouldn’t be enough.

The emissions targets are not legally binding, and Trump has already issued executive orders calling on his agencies to unwind some of the domestic regulations that are part of the U.S. national domestic contribution.

Some of those who recognize the failings of the Paris agreement and the significant costs of the regulations nonetheless argue that it is better to remain in the agreement and have a seat at the table, since there are no repercussions for failing to meet the targets.

They believe that withdrawal could have damaging diplomatic ramifications and cede leadership to other countries.

But even if Trump eliminates all of the domestic regulations, there are still significant costs for remaining in Paris. Chief among those costs are legal risks, a ceding of leadership to other countries, and various forms of cronyism.

Remaining in the Paris Agreement while failing to the Obama administration’s pledges would give environmental activists new arguments in their inevitable legal challenges to Trump’s domestic energy agenda.

As Heritage Foundation legal scholar Alden Abbott recently explained, even if environmental activists’ challenges fail in court (as they should):

… such challenges would absorb scarce public resources and cause delay in implementing sound environmental policies, while creating unwarranted public confusion as to the international ‘legality’ of the administration’s actions. Furthermore, continued U.S. membership in the Paris Agreement might be cited as an extra public policy ‘plus factor’ in challenges to environmental regulatory reforms, based on federal administrative law, rather than on the agreement. Such a ‘plus factor’ theory would have no basis in law, but it would further complicate defense of the administration’s actions.

Withdrawing from the Paris Agreement will be met with consternation from foreign leaders, but that certainly doesn’t make it a bad decision.

The reality is that the United States is, and will remain, a global superpower. Withdrawal from Paris will not change that. In fact, it will fortify it by demonstrating that the U.S. is willing and able to resist diplomatic pressure in order to protect American interests.

The only way to truly protect American interests is to withdrawal from the agreement altogether.

Withdrawing will also prevent future administrations from using the existing U.N. framework to avoid getting the Senate’s advice and consent in the treaty process, which is what President Barack Obama did in the Paris Agreement.

Furthermore, history has shown that refusal to join international climate commitments in the past did not cripple relationships with foreign countries.

For instance, despite strong pressure from the U.N. and European governments, President George W. Bush did not ratify or implement the Kyoto Protocol, in which 37 industrialized countries committed to legally binding cuts in greenhouse gas emissions.

Although criticism was loud, the Bush administration was able to overcome it and successfully work with other governments on numerous international issues of mutual concern. The same will hold true for the Trump administration.

The media is spinning a narrative that Paris is different from past international climate negotiations because businesses and investors support international action on global warming—even industries like big oil and big coal.

But it is nothing new for big business to support policies that, at first glance, seem to be against their business interests.

Just as industry has thrown its support behind cap-and-trade legislation or a carbon tax, special interests within industry will inevitably help craft a policy in which their bottom line is protected—or at least hurt less than their competitors.

Enron was a tireless advocate of strict global energy regulations supported by environmentalists. Enron also used its influence in Washington to keep laissez-faire bureaucrats off the federal commissions that regulate the energy industry.

Furthermore, there is a giant pot of taxpayer money available from the Green Climate Fund for the taking.

Negotiating a deal that may protect certain industries with subsidies and carve outs will only continue to leave American taxpayers and energy consumers exposed to harmful international climate policies.

The bottom line is that this international framework for addressing global warming is a costly and ineffective approach, and the alleged diplomatic costs of leaving the Paris Agreement—and the benefits of staying—have been far exaggerated.

Trump should now make good on his promise and withdraw.