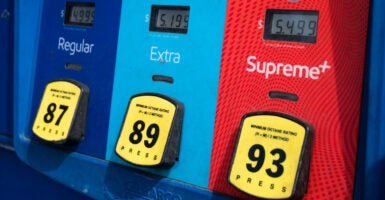 Americans feel the pressure build every time they fill up, of course, but it doesn’t stop there. Think of all the activities, goods, and services that rely on transportation, and one starts to see how higher gasoline prices increase costs throughout the entire economy. Pictured: Gas prices are displayed on a gas pump at an Exxon station in Washington March 8, 2022. (Photo: Bill Clark/CQ-Roll Call, Inc via Getty Images)

When a news anchor confronted Energy Secretary Jennifer Granholm about high gasoline prices and asked about the Biden administration’s plan to increase oil production in America, she burst into laughter. “That is hilarious,” she said.

It was early November 2021, and gas prices were averaging $3.39 nationally. The reporter wasn’t laughing. And now, with the average price well above $4 and still climbing, no one else is either.

Americans feel the pressure build every time they fill up, of course, but it doesn’t stop there. Think of all the activities, goods, and services that rely on transportation, and one starts to see how higher gasoline prices increase costs throughout the entire economy.

What, many are asking, is going on? And what can be done?

Crude oil prices account for roughly half the price of a gallon of gas, followed by refining costs, distribution, and state and local taxes. Unpacking each shows where policy choices influence the price of gasoline.

Start with the last, most straightforward factor first.

State and local taxes, most often used to fund transportation infrastructure, explain some significant differences between the price of gasoline between states. While taxes and fees in Nevada average roughly 20 cents per gallon, neighboring California’s tally 50 cents or more because of the state’s punishing climate policies that are designed to discourage people from driving.

Distribution—the delivery of gasoline to the customer—is a relatively stable contributor into the price of a gallon. But even here, policy matters.

For example, federal law severely restricts the ships available to deliver energy domestically, which actually makes it cheaper for some states to import fuel from Russia than from Texas. This is especially true for coastal states with limited pipeline capacity (yet another policy choice).

Then there’s refining, the process that turns oil into usable fuel.

Prices increase every summer, when the Environmental Protection Agency requires refineries to switch over to more expensive blends of gasoline to comply with Clean Air Act standards. Some states also mandate that refineries make boutique blends of gasoline, forcing customers to pay a green premium. Refinery expenses have also been increasing, as costs to comply with the EPA’s renewable fuel mandate are at record highs.

Last, and certainly not least, is crude oil, which provides 90% of Americans’ transportation fuel needs.

Gasoline prices tend to follow the price of crude oil closely, and everything else being equal, Americans see an increase of 2.4 cents per gallon every time the price of a barrel of crude oil increases by $1. Since oil is a globally traded commodity, the U.S. can’t set the price of oil. But domestic production—and the policies that allow or prevent that from happening—can influence it.

The world is now experiencing crude oil prices well over $100 per barrel—prices not seen since 2014. The best way to decrease oil prices—and, given the current context, dilute Russia’s sway in energy markets—is to increase supply. Yet President Joe Biden is unwilling to make the policy changes that would allow this to happen.

Biden remains adamant that the solution isn’t to use all the energy resources we have, but to force a transition to a narrow set of politically preferred technologies. So while asking American oil companies for short-term production increases to bail him out of political trouble, Biden has made it clear that he intends to put them out of business in the long term.

To that end, the administration’s regulatory agenda aims to choke energy supply. Even now, with Americans struggling, it wants to make it more expensive and difficult to explore for and produce oil, construct and operate pipelines, and access financing and investment. And that means it has to manipulate customer demand by discouraging gasoline use in the long run.

The only reason American families and businesses are not hurting more than they already are is because energy production is happening primarily on state and private lands, putting it a little further out of reach of Biden’s anti-energy agenda. For now.

In the same month of Granholm’s disastrous interview, White House press secretary Jennifer Psaki was asked whether the administration’s policies contributed to gasoline prices, to which she responded with surprising honesty: “The rise in gas prices over the long term makes an even stronger case for doubling down our investment and our focus on clean energy options.”

In other words: High prices are a feature, not a bug, of this administration’s policies.