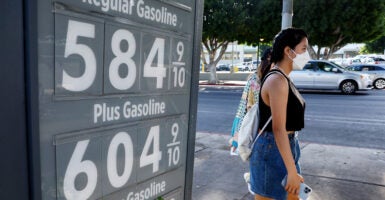 A pedestrian walks past a gas station March 25 in Los Angeles. According to GasBuddy, Los Angeles became the first major U.S. city to hit an average gasoline price of $6.00 or more per gallon, and California Gov. Gavin Newsom is trying to mollify motorists with gas tax rebates. (Photo: Mario Tama/Getty Images)

Greg Karraker is an advertising writer/creative director who blogs about the importance of local politics at thelittlepicture.net. He is the author of "The Little Picture: How Liberals, Progressives, and Twits in Local Governments Are Strangling America, and What to Do About It."

The solution should be crystal clear: Drill here and drill now. And permanently lower gasoline taxes as well. But Democrats are floating a number of government “solutions” to the supply problem that their policies created.

Biden is fond of blaming Russian President Vladimir Putin’s invasion of Ukraine for today’s hyperinflated prices, but the real culprit is the War on Oil, led by former bartender Rep. Alexandria Ocasio-Cortez, who can now afford to drive a snow-white Tesla Model 3. The New York Democrat pays no gas taxes for her Model 3.

But for every gallon of gasoline, the average Chicago motorist pays 81.4 cents in federal, state, and city taxes, the latter of which was raised by 3 cents on New Year’s Day 2021.

For the average Californian, taxes and fees are even worse, totaling $1.18 per gallon. California Gov. Gavin Newsom’s “solution”? Eight hundred dollars per household in rebates.

Newsom proposes to offer $400 debit cards to every vehicle owner in the state, limited to two vehicles per household. There would be no income-eligibility restrictions, so multimillionaires such as House Speaker Nancy Pelosi and her fellow California Democrat, Sen. Dianne Feinstein, and their husbands would each receive $800.

The debit cards would even go to drivers who own electric cars. To ensure “equity,” they would also be sent to illegal aliens who have registered vehicles.

For those who can’t afford even one car, Newsom’s proposal includes $750 million to give public transit users free rides for three months. Not surprisingly, it also features $500 million for projects throughout the state that promote biking and walking.

Getting in touch with his inner Biden, Newsom explained why he was willing to give away $11 billion of the state’s budget surplus. “We’re taking immediate action to get money directly into the pockets of Californians who are facing higher gas prices as a direct result of Putin’s invasion of Ukraine,” he said.

California Assemblyman Kevin Kiley, the Republican who led the unsuccessful ballot initiative to recall Newsom, introduced a different proposal: Suspend the state’s 51 cents per gallon gas tax immediately. For his proposal to pass in the Assembly, Kiley needed 54 votes. He got 18.

Meanwhile, more than 2,000 miles east of the California capital, Chicago Mayor Lori Lightfoot has promoted a drastically different approach. The city’s gas tax is 8 cents a gallon, and is earmarked to pay for snow removal, street paving, bridge maintenance, and related costs. It used to be 5 cents a gallon, but was increased by 3 cents on Jan 1, 2021.

In a recent announcement, Lightfoot said she would ask the City Council’s Finance Committee to consider rolling back the 3 cents-a-gallon gas tax increase through Dec. 31. For Chicago residents whose cars have 16-gallon tanks, that would amount to a 48-cent saving on a fill-up, roughly half the cost of a package of Twinkies at the gas station convenience store.

Lightfoot helpfully explained, “Our team has been working diligently on a plan. We’ve got to do our part at the city level to provide some relief for people that are struggling.”

Predictably, she also said that City Hall is considering a “variety of measures” to get gas prices under control, including asking the Illinois attorney general to look into the possibility that oil companies are guilty of price gouging.

In the same Friday afternoon announcement, the mayor’s office said, “Our team is currently working through plans to create a unique and impactful policy that will serve the needs of our residents with diverse transportation choices. Once that plan is finalized, it will be taken up as part of the Budget Committee.”

In any case, the gas tax holiday idea is gimmicky and counterproductive, whether it’s 3 cents or 30. Tax policy should be stable and predictable, and market forces—not the whims of politicians—should decide what prices should be on any given day.