Why This Governor Opposes a Bipartisan Bill to Subsidize Solar Energy 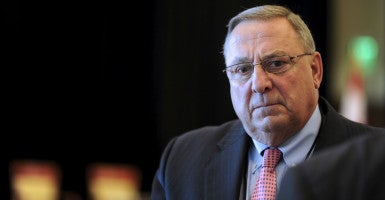 Maine Gov. Paul LePage is fighting a bipartisan proposal designed to boost solar power development in the state by a factor of 12, arguing that it would benefit only the wealthy.

At a business expo Thursday in central Maine, LePage, a Republican, warned that the solar power bill would increase electricity costs to 22 cents per kilowatt-hour.

“If you appreciate having good jobs and growing your business, you need to be really attentive to who you vote for,” LePage told the gathering in Waterville, where he formerly was mayor, Maine Today reported.

Under the solar energy plan, nearly half of the anticipated growth over five years would come from solar installations on residences and small businesses. About a quarter would emanate from community, industrial, and grid-scale projects to reach the goal of 250 megawatts newly generated by 2021.

Officials in the governor’s energy office who participated in negotiations on the proposal, however, concluded that the final compromise would hit ratepayers with higher energy costs.

Lisa Smith, a senior planner in the office, said the proposal maintains subsidies for homeowners who install solar-electric panels on their rooftops at levels that hurt other ratepayers.

Once the residential sector hits its goal of producing 118 megawatts, Smith said, residential rooftop solar alone will cost ratepayers $10.5 million a year for 20 years beginning in 2020. This does not include the current net-metered customers, which would add additional cost.

All ratepayers, regardless of solar investments, would offset that cost, she said.

“It’s heavily skewed toward residential solar, so half the program is the most expensive kind of solar, which just makes it more expensive,” Smith told The Daily Signal. “It primarily comes down to economics and cost shifting.”

Staffers in the energy office prefer a market-based solution.

The plan has been drafted as legislation that was the subject of a recent hearing.

In an unexpected move March 16, two Republican leaders in the Maine House of Representatives said the state’s Public Utilities Commission should decide the fate of “net metering,” the financial incentive for homeowners with solar electric panels that LePage strongly opposes.

The two are House Republican Leader Ken Fredette and Rep. Nathan Wadsworth, who helped draft the bill and is ranking member on the committee that held the hearing.

LePage wrote in his annual state of the state letter last month that government subsidies for renewable energy advantage the wealthy.

“Socialists love to subsidize new wind and solar energy projects because they think it will save the earth, but that kind of expensive and inefficient energy benefits only a few wealthy investors,” the governor wrote.

In April 2014, LePage vetoed another bipartisan solar energy bill because it would impose a new tax on residential and commercial electric bills to fund a solar program.

Smith said LePage prefers bringing more natural gas into the state through additional pipelines. Maine has lost much of its manufacturing base, and several large paper mills have closed during the last year and a half because of the state’s high energy prices.

LePage noted in his letter that Maine’s energy costs are the 12th highest in the United States and advocated that the legislature expand the biomass infrastructure.

Nick Loris, an economist at The Heritage Foundation who studies energy issues, said LePage’s skepticism toward subsidies for renewable energy projects is warranted.

“When you build a business model around subsidies, the benefits accrue to the politically connected, and the costs are dispersed among everyone else,” Loris told The Daily Signal, adding:

Maine will be paying for this as taxpayers and as ratepayers. If solar is cost-competitive and will save families and businesses money, the technology shouldn’t need preferential treatment.

Under the bill, utilities would enter into contracts with owners of solar installations to buy energy output from developers in each market while using the revenue from power sales to offset contract costs.

The legislation would allow customers to retain net metering agreements through 2029. Net metering is a mechanism where owners of energy systems, including solar panels, are given state credits for the electricity they add to a public-utility power grid.

State Rep. Sara Gideon, a Democrat who is assistant majority leader, said the plan would drive down the cost of renewable energy, allowing the state to grow its solar production.

Gideon, who was surprised by the Republicans’ change in position, said the program also would make it more accessible for low-income individuals to take advantage of using solar energy through installations that would allow them to earn energy credits, lowering their electricity bills:

I think it is disingenuous for the claim that this is not good for ratepayers. The whole concept that we’re looking at is really created by our public advocate, whose primary job is to protect ratepayers.

But Smith said because the plan would subsidize renewable energy over natural gas, electricity costs would rise for both businesses and residents.