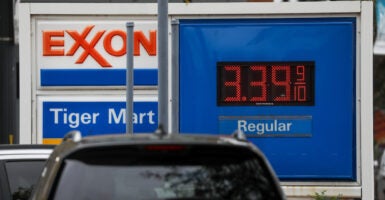 Biden’s approach to energy has been an economic disaster. Pictured: The cost of gas hit the highest price since 2014, as seen at this gas station in Washington state on Oct. 7. (Photo: Yasin Ozturk/Anadolu Agency/Getty Images)

President Joe Biden is drowning in a sea of crises of his own creation, and Americans are the ones who are paying the price.

There’s an ongoing humanitarian and national security calamity at the southern border.

COVID-19 is still rampant, despite Biden’s promises that he would defeat the virus, while his vaccine mandate has divided the country.

Americans are not taking the millions of jobs available and the economy is stalled, as many have chosen the option of being paid by the government to stay home instead of working.

Biden’s administration failed to identify the growing supply chain disruption, which did not occur overnight and threatens to further strangle the economy. Labor shortages are a contributing factor, including a lack of truck drivers to help unload ships and transport goods (see the above point about workers not accepting available jobs).

And energy prices continue to rise, helping to drive mounting inflation and hurting Americans—especially those with moderate or low incomes—at a time when the economy should be hitting its stride coming out of the pandemic lockdowns.

It is on the costs of energy where Biden’s failures are most starkly visible.

On his very first day in office, Biden scrapped the Keystone XL pipeline, killing 11,000 jobs in the process and making good on his campaign promise to be hostile to the fossil fuel industry.

Former President Donald Trump had propelled America to energy independence, but Biden has purposely squandered it. His policies are designed to reduce domestic production of petroleum, meaning we have become necessarily more reliant on foreign sources.

Biden’s approach has been an economic disaster.

According to The Wall Street Journal, the price of crude oil has jumped by 64% to a seven-year high. The cost of natural gas has doubled in just six months. Heating oil is more expensive by 68%, just in time for winter. And gasoline is over $3 per gallon on the national average, up by almost a dollar over the past year.

Energy costs are one driver of inflation, which is already a concern and could get worse.

The situation he created has led Biden into embarrassing situations where he has been forced to plead for rescue.

Over the summer, his administration begged OPEC to increase oil production to combat rising gasoline prices. It refused.

This month, Reuters reported that the Biden White House has approached domestic oil and gas producers, asking for help. These are the very companies that Biden has been demonizing and now he wants them to save him from himself.

Anne Bradbury, the chief executive officer of the American Exploration and Production Council, explained who the culprit is.

“By pursuing policies that restrict supply and make it harder to produce oil and natural gas here in America, Americans will have to pay more for their energy,” she said.

“Certainly, we all want to keep gasoline prices low, but the threat of the crisis—the climate crisis—certainly can’t wait any longer,” she said on Oct. 6.

One week later, Psaki appeared to soften the message somewhat, in recognition of how higher energy bills affect people, but attempted to mislead about the scope of the problem.

“[T]he American people are, of course, impacted by rising prices of gas in some parts of the country—not all,” she said.

This, of course, is not true. Gas prices are higher in all 50 states.

White House chief of staff Ron Klain then underscored the indifference of the Biden administration to the concerns of regular Americans by approving of a tweet from Harvard economist Jason Furman, who labeled “economic problems we’re facing,” such as “inflation, supply chains, etc.,” as merely “high-class problems.”

For Americans still struggling, it must be jarring that the White House chief of staff thinks rising grocery bills—driven by fuel prices and inflation—are “high-class problems.”

Such a callous dismissal of real-world issues, the endorsement of an Ivy League elitist view that working people are just imagining things, simply feeds the prevailing belief that Biden simply is bad at his job.

But rather than face reporters or describe to Americans what he’s doing to combat these severe economic problems—and all of the other crises he’s inflicted on the country—Biden has almost entirely avoided taking questions.

On the rare occasions that he comes to the cameras to deliver remarks, most often he finishes speaking, turns around abruptly, and returns to the recesses of the White House.

It’s an apt image presented by an administration that is usually very concerned about visuals and symbolism.

Biden is leaving the lasting impression that, as he does to members of the press, he is simply turning his back on the American people.