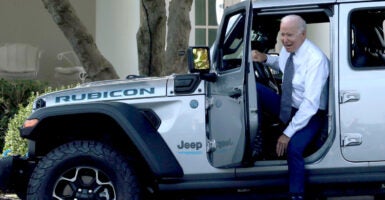 It’s especially embarrassing because the U.S. has billions of barrels of proved oil reserves and is the No. 1 producer in the world. Pictured: Biden climbs out of a Jeep Wrangler Rubicon Xe after driving it around the White House driveway Aug. 5 following remarks during an event on the South Lawn of the White House on the administration’s efforts to strengthen American leadership on "clean "cars and trucks. (Photo: Win McNamee/Getty Images)

Not only is this confusing because OPEC+ is a cartel of nations competing against private American companies and includes political adversaries of the United States. It’s also embarrassing because the U.S. has billions of barrels of proved oil reserves and is the No. 1 producer in the world.

As Sullivan stated Wednesday: “Higher gasoline costs, if left unchecked, risk harming the ongoing global recovery. The price of crude oil has been higher than it was at the end of 2019, before the onset of the pandemic.”

With national average gasoline prices higher than they’ve been since 2014, some context on gas prices is helpful.

What goes into the price of gasoline: With crude oil being the main component in gasoline, gas prices tend to follow the price of crude oil closely. So an increase in crude oil prices will affect gasoline prices.

Crude oil accounts for 55% of the price of a gallon of gasoline. Refining accounts for 16%, taxes 16%, and distribution and marketing 13%. Local prices vary, since states tax gasoline at different rates and federal policies such as the Renewable Fuel Standard increase the costs for refineries (which turn crude oil into gasoline and other products).

What we know (so far) about higher prices: Some summertime increases are to be expected. The Environmental Protection Agency and state regulations require more expensive blends of gasoline in summer months when Americans tend to travel more, thus increasing demand.

The pandemic and government responses to it contributed other factors. Crude oil and gasoline prices plummeted in 2020, and several refineries closed.

Economic recovery is not as simple as flipping a switch. The dance among producers, refineries, and a variety of consumers is not easy to sort out, let alone centrally plan. The speed of recovery for each of those parties has been “an important uncertainty,” as the Energy Information Administration wrote in March.

Since oil is a globally traded commodity, the U.S. can’t totally insulate itself from the ups and downs of oil prices. But the policies and posture of the Biden administration to date surely are not helping to tamp down gasoline prices.

Contrary to Sullivan’s statement, President Joe Biden has not “made clear that he wants Americans to have access to affordable and reliable energy, including at the pump.”

Biden’s administration has worked quickly to challenge nearly every aspect of oil production and use through regulations and executive orders: financing and private sector investment, exploration and production, pipeline construction and operation, and use in cars and trucks.

Additionally, the administration has generated considerable political risk by threatening future energy and climate policies to overhaul the American energy sector with a transition away from conventional sources.

Biden’s commitment to the Paris climate agreement and his vision in the American Jobs Plan, and Congress’ efforts to implement the Green New Deal in piecemeal fashion, seek to orient energy markets around arbitrary political goals. They prescribe the use of certain kinds of energy—wind, solar, electric vehicles—rather than principles of competition, dynamic access to markets, affordability, consumer choice, and reliability.

Perhaps all of the demands from the left to “restructure” and “reimagine” energy markets are bumping up against reality.

History gives us some advice. In less than a decade, the U.S. went from projections in the early 2000s of energy shortages to being the largest producer of oil in the world.

The U.S. exported more petroleum than it imported in 2020. That hasn’t happened since 1949, and it’s hard to overstate how revolutionary that is for domestic and international oil markets.

This revolution was thanks to innovation in the private sector to develop economic directional drilling and hydraulic fracturing, private property rights and regulatory reform at the state level, and Congress’ 2015 removal of the oil export ban.

Although Americans can’t control everything that goes into the price of gasoline, the president’s approach will cause self-inflicted wounds.

Instead, Biden should lean into the space where Sullivan ended: “competitive energy markets will ensure reliable and stable energy supplies.”