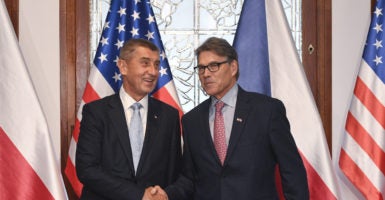 Over the past few months, Energy Secretary Rick Perry has been delivering an important message to our country’s allies: America’s energy renaissance is your gift, too. As Perry said at the beginning of the year, “The United States is not just exporting energy, we’re exporting freedom.”

That’s good for both economic and geopolitical reasons. When domestic producers have new customers abroad, America’s allies will have more energy choice as well as freedom from hostile actors that manipulate energy markets.

On a recent trip to Poland, Ukraine, and the Czech Republic, Perry described his job this way: “You go sell your product, whether you are selling brushes door to door back in the 1930s or whether you’re selling LNG today. You gotta go knock on doors, and I consider that to be part of my job, is to go sell America and sell freedom.”

Poland, Ukraine, and the Czech Republic have unique energy needs. The Czechs have for years sought to add a new nuclear reactor to the six that supply roughly 35 percent of their electricity.

Poland, a net importer of oil and gas, is in the process of building an LNG terminal, and is exploring the possibility of a gas pipeline from Norway. It also is one of the top producers and consumers of coal in a European Union, which is increasingly intolerant of coal.

Ukraine has drastically diversified its suppliers in response to Russia’s manipulation of natural gas exports in 2014. It also has a well-developed nuclear industry that is looking to expand.

What does the U.S. have to offer?

For starters, it offers energy wealth and expertise. As Perry highlighted in remarks to both Poland and Czech audiences, the U.S. is the world’s top producer of oil and natural gas. For the first time in 75 years, the U.S. is now a net exporter of crude oil and refined petroleum products.

February 2016 marked the first time in more than 50 years that a company in the contiguous U.S. exported LNG. The U.S. could be the world’s largest exporter of LNG in the next three to four years.

The nuclear industry, as Perry noted, has developed expertise in safely operating power plants decades beyond initial operating licenses. (The Nuclear Regulatory Commission has approved 20-year license extensions for 89 reactors.) The industry has also made strides in plant performance and efficiency metrics.

In a region of the world where bad actors like Russia use energy as a weapon, the benefits of American-produced energy extend far beyond the economic gains. Many European countries are the victim of manipulated energy markets. As Perry highlighted, the U.S. offers more choice through transparent, competitive, and reliable energy resources, and supports the peaceful use of nuclear energy. American producers offer European nations options to diversify their energy supply “free from the threat of coercion.”

Perry is wrapping up a trip in the Middle East promoting a similar message. In visiting Qatar, which announced its departure from the Organization of the Petroleum Exporting Countries, Perry tweeted of the importance of “the need for free, fair, and diverse markets to promote energy diversity.”

Had a productive visit with Qatari Minister Al Kaabi where we discussed our strategic relationship on energy cooperation as world leaders in natural gas and the need for free, fair, and diverse markets to promote energy diversity. pic.twitter.com/stvFU4ozEC

In Saudi Arabia, he continued to make the case that “any nation seeking to develop a truly safe, clean, and secure nuclear energy program should turn to American companies who have the ability to provide the technology, knowledge, and experience that are essential to achieving that goal.”

What’s the secret sauce? How can Perry go into these countries and confidently promise such things?

Simply, companies in the U.S. are privately owned and cannot wield the power of governments to force action on the part of its customers outside the bounds of agreed upon contracts. This stands in stark contrast to oil, gas, and nuclear power companies in countries like Russia and China, which are mere outposts of their governments.

America’s freedom of enterprise is one of its greatest selling points—and it’s a message a government official like Perry can uniquely offer.