Biden’s Afghanistan Disaster: Predictable and Not Over 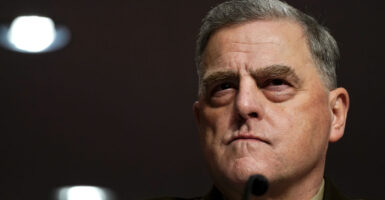 "It is clear—it is obvious—the war in Afghanistan did not end on the terms we wanted, with the Taliban now in power in Kabul," Gen. Mark Milley says. Pictured: Milley, chairman of the Joint Chiefs of Staff, listens to a question during Tuesday's hearing by the Senate Armed Services Committee. (Photo: Kent Nishimura/Los Angeles Times/Getty Images)

At one point, Sen. Joni Ernst, R-Iowa, asked Army Gen. Mark Milley, chairman of the Joint Chiefs of Staff, some simple yes-or-no questions about its consequences.

“Does the Taliban and its other terror partners have more ability to train and prepare in Afghanistan now that we’ve left?” she asked.

Ernst then cited an inexplicable statement Biden made Aug. 20, claiming al-Qaeda was gone from Afghanistan.

“What interest do we have in Afghanistan at this point with al-Qaeda gone?” Biden said then. “We went to Afghanistan for the express purpose of getting rid of al-Qaeda in Afghanistan, as well as—as well as getting Osama bin Laden. And we did.”

The United States, of course, did get rid of bin Laden—in Pakistan. But did we get rid of al-Qaeda in Afghanistan?

Not according to Marine Gen. Kenneth McKenzie, who commands U.S. Central Command and also testified at Tuesday’s hearing.

“Senator,” he said, “al-Qaeda still maintains a presence in Afghanistan.”

“You may have heard in our poll that 60% of those we talked to now fear there is more threat of terrorism in the United States because the Taliban is in control of Afghanistan,” Garrett said. “Are they wrong?”

“The threat of terrorism metastasized out of Afghanistan a long time ago,” Blinken said. “It is more acute in other places around the world. And in Afghanistan itself, we were able to vastly diminish al-Qaeda and any threat that it poses. If it reconstitutes, we’re putting in place measures over the horizon, as we say, to make sure we can see it and act on it.”

“Secretary Blinken had said on Aug. 22 that the threat of terrorism metastasized out of Afghanistan a long time ago,” she said. “General McKenzie, is there any terrorist threat in Afghanistan now?”

“What we see is ISIS nearly rejuvenated with the prisoners that came out of Parwan and Pul-e-Charkhi prison,” McKenzie responded. “They’re gathering strength.”

“We have yet to see how that is going to manifest itself,” he said. “But we know for a certainty that they do aspire to attack us in our homeland.”

“And we know the same for al-Qaeda,” McKenzie said.

“So that threat, it has metastasized, and it is resident in other parts of the world,” he said. “In my part of the world, though, it certainly is in Afghanistan.”

Milley told the committee that the Taliban had not lived up to the conditions of the Doha agreement it had made with the Trump administration, a pact that required a withdrawal of U.S. forces from Afghanistan.

“Under the Doha agreement,” Milley testified, “the U.S. would begin to withdraw its forces contingent upon the Taliban meeting certain conditions, which would lead to a political agreement between the Taliban and the government of Afghanistan.”

There were seven conditions applicable to the Taliban and eight applicable to the United States. While the Taliban did not attack U.S. forces, which was one of the conditions, it failed to fully honor any other commitments under the Doha agreement. Perhaps most importantly for U.S. national security, the Taliban never renounced al-Qaeda or broke its affiliation with them.

In the fall of 2020, my analysis was that an accelerated withdrawal without meeting specific and necessary conditions risks losing the substantial gains made in Afghanistan, damaging U.S. worldwide credibility, and could precipitate a general collapse of the ANDSF [Afghan National Defense and Security Forces] and the Afghan government, resulting in a complete Taliban takeover or general civil war.

Based on my advice and the advice of the commanders, then-Secretary of Defense [Mark] Esper submitted a memorandum on [Nov. 9] recommending to maintain U.S. forces at a level between about 2,500 and 4,500 in Afghanistan until conditions were met for further reduction.

Initially, despite this recommendation, then-President Donald Trump moved ahead with a plan to withdraw all U.S. forces.

“On 11 November 2020, I received an unclassified signed order directing the U.S. military to withdraw all forces from Afghanistan by 15 January 2021,” Milley testified.

But then, Trump changed course.

“After further discussions regarding the risks associated with such a withdrawal, the order was rescinded,” Milley told the Senate committee, adding:

When President Biden was inaugurated, there were approximately 3,500 U.S. troops, 5,400 NATO troops, and 6,300 contractors in Afghanistan with the specified task to train, advise, and assist, along with a small contingent of counterterrorism forces.

Despite the Taliban’s failure to abide by the Doha agreement, Biden decided to go ahead and remove all U.S. forces from Afghanistan.

“On 14 April,” Milley testified, “the president announced his decision and the U.S. military received a change of mission to retrograde all U.S. military forces … and transition the U.S. mission to an ‘over the horizon’ counterterrorism support and security assistance force.”

It is clear—it is obvious—the war in Afghanistan did not end on the terms we wanted, with the Taliban now in power in Kabul.

We must remember that the Taliban was and remains a terrorist organization and they still have not broken ties with al-Qaeda.

But we must continue to protect the United States of America and its people from terrorist attacks coming from Afghanistan. A reconstituted al-Qaeda or ISIS with aspirations to attack the United States is a very real possibility and those conditions, to include activity in ungoverned spaces, could present themselves in the next 12 to 36 months.

Afghanistan, run by the Taliban and providing sanctuary to al-Qaeda, presents the same security problem now that it did in 2001.