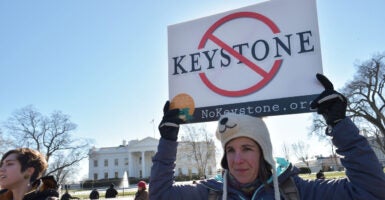 On the campaign trail, then-presidential candidate Joe Biden promised to kill the Keystone XL pipeline, which would transport 830,000 barrels of crude oil each day from Alberta, Canada, to Nebraska, a pledge met with elation from environmental activists across the globe.

So no one was surprised when, on his first day in office, Biden followed through by revoking the pipeline permit through executive order, again prompting applause from the green crowd.

But even a cursory examination of the issue reveals Biden’s actions to be mere virtue signaling, which will not stop the oil from flowing into the United States, and could prove even more environmentally dangerous than the Keystone XL pipeline itself.

The story of the pipeline is a long one. After Congress declined to pass climate change legislation near the end of President Barack Obama’s first term, the environmental lobby went looking somewhere else for victories. It zeroed in on the proposed Keystone XL pipeline, designed to stretch about 1,800 miles and carry tar sands crude, itself a favorite bogeyman of environmentalists.

Following lengthy public handwringing over the proposal, the Obama administration eventually buckled before the activists and blocked the permit.

After President Donald Trump reversed that decision and greenlighted the project, Biden made his promise to undo it. And he certainly could not let Tom Steyer—billionaire environmentalist, fervent Keystone XL opponent, and fellow Democratic presidential aspirant—outflank him from the left on the issue.

The problem for Biden is that blocking the pipeline achieves nothing more tangible than demonstrating his moral correctness to the green crowd, while very possibly causing greater harm to the environment.

About 70% of petroleum products in the United States are already transported by pipelines, with truck and train shipping combining for a mere 7%. One would then naturally expect that most accidents occur with pipelines, but one would be wrong.

Though responsible for a tiny fraction of petroleum product transportation, road and rail methods are where a majority of mishaps occur.

From 2005 to 2009, roadway transmission averaged 19.95 incidents per billion ton-miles each year, while railway accidents occurred at the rate of 2.08 accidents per year. In contrast, liquid pipelines produced only 0.58 incidents annually.

The environmentalist specter of the pipeline as a leaking, polluting menace just does not hold up to the barest scrutiny.

It would be a different argument if Biden’s actions were going to actually halt the flow of oil from Alberta into the United States, but that clearly is not going to happen. Canada depends on the economic benefits of the oil sands, as its negative reaction to Biden’s decision demonstrated, so into tanker trucks and railway cars the crude will go.

Biden has forced the oil out of the safer pipeline and onto the more hazardous roads and railways. But even if the oil meant for the pipeline was blocked completely, the impact on the global climate would be almost nonexistent, clocking in at a meager four ten-thousandths of a degree (Celsius) in temperature change over the next 79 years.

With the attention this particular pipeline has received, it would be easy to be deceived into thinking that it was some monumental project never before undertaken in North America. This is hardly the case.

There are nearly 200,000 miles of existing liquid petroleum pipelines in this country today, crisscrossing the nation so densely that a graphic representation looks like an interstate highway map of the United States. Knocking down 1,200 additional miles is hardly the great triumph Biden is beating his chest about.

In fact, the language that Biden used in his executive order may offer the most proof that the entire gesture is nothing but political posturing. He wrote, “Approval of the proposed pipeline would undermine U.S. climate leadership by undercutting the credibility and influence of the United States in urging other countries to take ambitious climate action.”

This revealed that a prime motivator in revoking the permit was to give the appearance that America is doing something, regardless of the actual impact.

The 11,000 American workers who would have been employed through the Keystone XL pipeline are unlikely to offer Biden pats on the back for his preening for his environmental audience. About a thousand people were immediately laid off when the permit was pulled, 10,000 more jobs will now never exist, and $3.4 billion will never be added to the gross domestic product.

To top it all off, the Biden administration and the media insult these hardworking Americans by dismissing these lost jobs as only “temporary” positions.

This ignores the reality that construction jobs are temporary by nature, yet are key to supporting widespread employment, particularly when the country is attempting to emerge from an economic downturn.

Further, many of the people who simply shrug off these job losses are the very same folks who trumpeted construction jobs supported by the Obama stimulus package. “Temporary” was not a word they used to describe the employment numbers back then.

Biden’s “climate czar,” the noted private plane-flying John Kerry, waved away any concerns about workers and their families suffering from the cancellation of their jobs in a press conference in late January. He displayed the cavalier attitude prevalent among environmental activists by advising that displaced workers could “make solar panels” instead.

Apparently, “make solar panels” is the new “learn to code” in the condescending parlance of elites talking down to the laboring masses facing unemployment.

Assessing whether Biden accomplished anything by stopping the Keystone XL pipeline depends on which question is asked.

Did he earn the praise of environmental activists and repay them for their support in the 2020 election? Most definitely.

Did he do anything to benefit the United States, either environmentally or economically? Almost assuredly not.