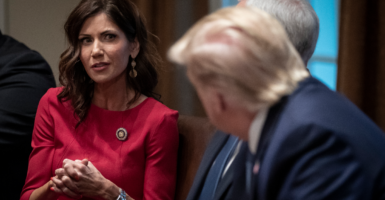 South Dakota Gov. Kristi Noem—seen here conferring at the White House on Dec. 16, 2019, with then-President Donald Trump at a meeting of the Governors Initiative on Regulatory Innovation—says thousands have been left without jobs by President Joe Biden's cancellation of the Keystone XL pipeline. (Photo: Drew Angerer/Getty Images)

Not only are thousands of workers left without jobs, Noem said, but communities were preparing for an influx of residents to work on the pipeline and the tax revenues it would generate.

The nearly 1,200-mile leg of the pipeline was to run from Alberta, Canada, through Montana, into South Dakota, and on to Nebraska. It was to run diagonally through nine counties in South Dakota before exiting the state.

“[The cancellation] was just wrong. It was responding to politics, but not the facts, behind what this really does for us in this country and the [energy] independence it gives us,” Noem said Wednesday night on Fox News Channel’s “Hannity” program. “And I’m all about supporting a diversified energy portfolio, but it should be an American energy portfolio. This is a national security issue.”

A week earlier, Feb. 16, on “Fox News Primetime,” the Republican governor said construction of the pipeline was well underway when the president pulled the plug on it:

In fact, they had already built a couple of pumping stations. They had the pipeline laid out ready to be installed, and then when [Biden] pulled the permits, everything just stopped.

Noem related stories she had heard of families and businesses facing economic hardship that will result from the cancellation.

“We had restaurants and motels and gas stations that had expanded, getting ready for the workers that were going to be here [for] the next several years building the pipeline,” she said, adding that communities were counting on the property tax revenues for road maintenance and teachers’ salaries.

“Overnight, their whole plan for the future was just gone,” Noem said.

A week earlier, Feb. 8, South Dakota residents and business owners upset by the cancellation appealed to the state’s Republican congressman to help save the project.

Rep. Dusty Johnson, R-S.D., organized the gathering and was joined by Rep. Kelly Armstrong, R-N.D., who is sponsoring legislation to restart the pipeline, and Rep. Dan Newhouse, R-Wash., chairman of the bipartisan Congressional Western Caucus, The Associated Press reported.

Jeff Birkeland, the CEO of West Central Electric Cooperative, a business that would have serviced pump stations along part of the pipeline route, said his company “lost $90 million in revenue.” He added that the pipeline would have created an estimated $100 million in annual tax revenues for the state government and municipalities.

Johnson said he hopes the testimonies by South Dakotans will help revive the pipeline project. “It is so often that stories hold more weight than data,” he was quoted as saying.

South Dakota’s unemployment rate decreased 0.5% to 3% in December 2020, before the pipeline cancellation, according to the state’s Department of Labor and Regulation. The number of unemployed decreased by 2,000 (12.5%) to 14,000.