We Can Move Past Keystone XL By Building It 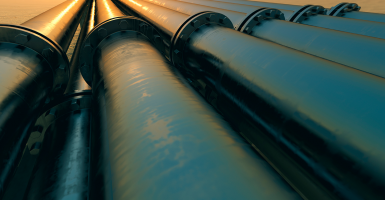 In discussing infrastructure in his State of the Union last month, President Obama said “Let’s set our sights higher than a single oil pipeline.”

Well, it’s a lot easier to do that if we allow the pipeline to be built.

On Wednesday, the House of Representatives passed legislation that would approve the permit to construct the Keystone XL pipeline. The Senate has already passed identical legislation.

Giving the project the green light would create thousands of jobs and inject billions to the economy … but Obama has already promised to veto any Keystone XL legislation.

The administration has consistently said the process needs to play out—meaning Obama is determined that he, not Congress, will decide if the pipeline ever gets to be built.

But how are we going to set our sights higher than a single pipeline if the time to approve such a project is 2,337 days and counting?

The administration has used every excuse in the book to delay and obstruct construction of Keystone XL: environmental concerns, the pipeline running over the Ogallala aquifer, approval of a reroute, climate change concerns, conflict of interest of the company conducting the environmental review, the effect of low oil prices on alternative transportation and a court case in Nebraska, among others.

Each time logic and reason has won out.

The construction of the southern leg of Keystone XL, which did not need the president’s approval, created a boon for the Oklahoma and Texas economies, injecting $2.1 billion and $3.6 billion respectively. Building the northern leg of the pipeline offers similar advantages: jobs, economic growth and up to 830,000 barrels of oil per day from a friendly, reliable trading partner—Canada.

As for potential downsides, the State Department has commissioned five major studies of the project (four of them on Obama’s watch), and each determined that the pipeline would pose minimal environmental risk and have virtually zero impact on global warming.

Building Keystone XL can be accomplished without the crutch of taxpayer dollars and will result in billions of dollars of tax revenue for the states through which it runs. By obstructing the development Keystone XL, Obama is rejecting job creation, energy production and common sense.