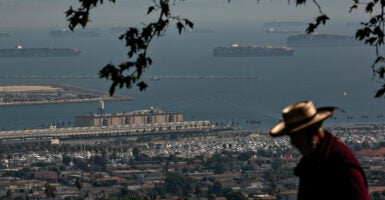 The Port of Los Angeles is backed up with a growing number of incoming cargo ships waiting offshore to be unloaded Oct. 13 in San Pedro, California. (Photo: Jason Armond/Los Angeles Times/Getty Images)

Having made a mess of Afghanistan, the Biden administration now turns its trademark incompetence to something closer to home; namely, the supply chains that put toys under our Christmas trees and food on our tables.

Biden is using the pandemic as an excuse, but the truth is that government diktats, handouts, and cronyism have catastrophically gummed up our supply chains, and it’s getting worse.

In response to rising criticism about his absent administration amid “bare-shelves Biden” trending online, the president bestirred himself on Oct. 13 to trumpet a Band-Aid, while his transportation secretary smirks about late shoppers and predicts shortages may last “years and years.”

Contrast this fatalism with former President Donald Trump’s hyperactivity when supply chains were creaking early in the COVID-19 pandemic, sitting down with the people doing the actual work, asking them what’s in the way, what they need, and what’s gumming things up—and then jawboning and “executive ordering” bureaucrats to get off their rears.

Instead, the Biden administration mumbles and smirks while, in the shadows, handing over supply chains to unions and environmental activists.

Supply chains are in trouble worldwide due to Chinese disruptions, and the U.S. stands out by far, particularly the Port of Los Angeles, which—together with the adjacent Port of Long Beach—handles 40% of containers bringing both finished goods to American homes and critical parts and materials to American factories.

Without those containers, entire industries grind to a halt and shelves clear across America.

There are now 50 to 70 ships anchored off Los Angeles, with delays of up to three weeks. Los Angeles’ overflow now clogs ports across the country.

Roughly 16% of all trans-Pacific ships are currently stuck at anchor, while government-owned and unionized Port of Los Angeles strolls along at 60% to 70% of capacity, closed evenings and Sundays.

The sister Port of Long Beach did implement so-called 24/7 operations several months ago—a magic wand Biden dangled for the Port of Los Angeles on Oct. 13. But in reality, “24/7” at Long Beach means only one of six terminals, and only Monday to Thursday.

Apparently, “24/7” in government-speak isn’t what it means to the rest of us. Not surprisingly, since it’s not the union’s job to make things easy, it’s fought automation for years to protect its $200,000 salaries, while imposing arcane rules on truckers that make it a nightmare to do pickups.

The chokehold is sending factories and retailers nationwide into panic mode, not only for the risk-the-company Christmas season, but for the critical supplies and materials needed to run their own factories.

Home Depot and Target resorted to chartering their own ships, only to run into the meat grinder of inland supply chains. Analysts are predicting the chaos could last into 2023.

Because imported resins and materials are necessary in food production and delivery, even grocery store shelves are now clearing across the country. Nearly 20% of beverage and bakery products are out of stock nationwide, while Costco and Sam’s Club stores are reimposing purchase limits on some goods.

Across the states, shortages are being reported in bread, meat, juices, and now, diapers. Even dairy—critical for kids—is dwindling to core products amid driver shortages.

Parked ships are easy to see, but ports are just the beginning. Once goods get off the ship, there aren’t enough truckers, or enough chassis to carry the containers, or enough warehouse space, or enough rail capacity.

Railhead waits are now averaging 10 to 20 days while warehouses in Los Angeles are already 98.8% full. It’s now so expensive to import that containers ship back empty, leaving U.S. products to sit on trains too full to take new loads, which back up the ports and block them from unloading incoming ships. It’s layer after layer, with supply chains failing at every stage like dominos.

The go-to excuse for the administration and the media is that import volumes soared amid COVID-19, so it’s all just too much. The truth is, the Port of Los Angeles’ own numbers say containers handled are actually down 1% from a year ago, and rose just 11% in the two years through August. That’s half the jump from 2009 to 2011, when supply chains were not collapsing.

As comedian Jon Stewart remarked about the 2008 financial crisis: This isn’t a perfect storm; it’s a regular storm, and we have a s—– boat.

So, what is driving the chaos? Government, along with union chokeholds, environmental and labor mandates on truckers, mandates on supply chain workers across the board, crony trade restrictions, and excessive unemployment benefits, nationwide, but especially in California.

Remember, too, that this is all before Biden’s vaccine mandates kick in. California truckers, in particular, have been socked by the state’s notorious AB 5 law restricting gig workers and independent contractors, combined with truck emission mandates introduced just last year that can mean tens of thousands of dollars out of pocket.

Many truckers have already decamped to greener pastures in friendlier states. Finally, crony trade restrictions like the century-old Jones Act can actually make it cheaper to import from China than to ship goods domestically, knocking internal shipping as an option.

If Biden is serious about solving supply chains, he needs to get ports, truckers, railroads, and warehouses back to work.

That means loosening union chokeholds on critical infrastructure, using the Taft-Hartley Act if needed. It means clearing out labor and environmental mandates that ban or disincentivize flexible workers and contractors. And it means draining the swamp of crony and environmental regulations that gum up supply chains with 100-year-old detritus on top of whatever activists are banning this week.

Above all, Biden needs to stop making it worse. That means he must resist spreading California’s job-killing labor and environmental mandates across the country, from Environmental Protection Agency truck emission rules to congressional Democrats’ jamming nationwide anti-contractor legislation into their $3.5 trillion tax-and-spend bill.

Finally, it means withdrawing Biden’s reckless vaccine mandate, which is already pulling thousands of additional critical workers off the job before it has even kicked in.

Biden has a lot to do, and he’ll need to stand up to unions and radical activists if he stands a chance of actually delivering.