No, We Don’t Need to Transform the American Food System 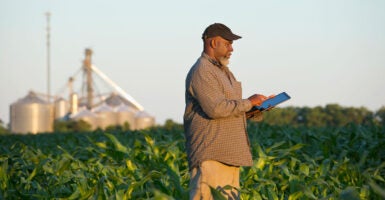 The U.S. food system has steadily and dramatically provided more food to more people while using less resources and land. And yet, leftists believe it must be radically changed and brought under central control. (Photo: Ariel Skelley/Getty Images)

The American food system is a global leader when it comes to productivity, resiliency, and innovation. It provides an abundance of safe and affordable food to not only Americans, but people across the globe. And yet, some on the left want to radically change one of the most impressive food systems in the world.

Here’s some important context: U.S. agricultural productivity has increased dramatically over the past 75 years. American farmers and ranchers produced more food on less land during this time. Farm output nearly tripled while the amount of land actually decreased.

Americans are also paying less for food; in 2019, Americans’ share of disposable income going to total food was at a historic low of 9.5%. This number has been declining significantly for decades.

For many on the left, there’s actually a general disdain for the American food system, which they view as causing “incalculable damages.”

There are policy issues that need to be addressed within food and agriculture, but the critics start with the incorrect premise that the food system itself (i.e. the entire food supply chain) needs to be drastically changed.

To achieve their desired food system, some critics want to develop a national food policy, a federally centralized plan for the food system, from agricultural production to what consumers buy and eat.

While the critics’ plans are short on specifics, they generally want to push the same vague food and agricultural goals espoused by proponents of the Green New Deal.

For example, their policy objectives focus on issues ancillary to food production and distribution, especially to achieve their environmental objectives. They want to make these ancillary objectives a top priority for the food and agricultural sector, apparently even a higher priority than efficiently producing food.

Many of these critics want to impose their desired agricultural practices onto American farmers, such as moving toward practices that don’t use fossil fuels or otherwise are concerned with achieving environmental objectives, with little consideration given to the costs and trade-offs of their policies (and the sound environmental stewardship of farmers).

The critics do properly recognize that existing subsidies can be problematic by encouraging the production of certain foods. Yet, instead of removing market-distorting subsidies so that farmers meet consumer demand, they simply want to change the subsidies to directly encourage the production of the foods that they prefer (i.e., what they consider to be “healthy food”).

They would also go beyond subsidies to influence and dictate personal dietary choices. Soda taxes, junk food taxes, and even meat taxes are just some of the ways they seek to reduce the consumption of food that they disfavor.

This food police mentality doesn’t exist merely out of an alleged concern for human health. These critics appear to recognize that influencing and limiting consumer choices can have a direct impact on the food that is produced in the first place. So, for example, if they think meat production is a problem for the environment, then they will try to reduce meat consumption.

Legislators should reject this attempt to use the federal government to radically change the food system. But they should go even further, such as through a legislative resolution, to make it perfectly clear that the American food system (not necessarily our food and agricultural policy) is a model for the world.

They should stress that American farmers and ranchers and other private actors throughout the food supply chain, from truck drivers to food retailers, are among the best in the world (if not the best), and they (not the government) are the driving force behind its success.

Finally, they should stress that individuals, not federal bureaucrats, should make decisions about their personal dietary choices.

The bottom line: We don’t need a national food policy, and we don’t need to transform our food system.

If the federal government got out of the way, the food system would better meet the needs of Americans. It would continue to develop innovations, even those likely to appeal to these critics, such as plant-based alternatives to meat and dairy—ironically, the marketing of these products are being threatened by government intervention.

Policymakers should remove government intervention that hinders those who make our food system possible, while thoughtfully addressing any specific policy concerns, including environmental concerns, in a manner that doesn’t undermine what makes our food system such an incredible success.