Lawmakers Should Reject Efforts to Hold Back Plant-Based Alternatives 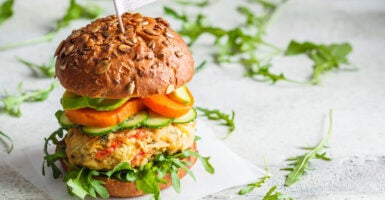 The Real MEAT Act would require plant-based companies to label their products as "imitation" products. This is being pushed by some in the meat industry trying to hurt its competitors. Pictured: A burger with a plant-based patty. (Photo: vaaseenaa/Getty Images)

Veggie burgers are not made from cows. They are also nutritionally different than burgers made from cows. And yet, some in the meat industry are trying to assert Americans can’t grasp these and similar obvious points. As if Americans don’t understand that there’s a difference between meat from animals and plant-based alternatives to meat.

This issue is really about competition and the increased demand for plant-based alternatives to meat. So some in the meat industry (generally livestock producers) are going to state legislatures and Congress to push legislation that would protect them from this increased competition in the marketplace.

Last Congress, some legislators introduced legislation known as the Real MEAT Act. There was both a House and Senate version of the legislation, but both bills would require plant-based companies to label their products as “imitation” products. This legislation will likely reappear again this Congress.

The required use of “imitation,” a long-standing scheme to hurt food competitors, conveys that the product is inferior to the government-protected food, and it’s something that is unnatural.

The “imitation” requirement is required regardless of how plant-based products are packaged and advertised. For example, if a plant-based alternative company prominently communicates that its product is plant-based and not meat, the product would still have to be labeled as “imitation.”

According to the legislation, if the plant-based product “appears to be” a meat or beef product or has “aesthetic qualities” or “chemical characteristics” of meat or beef, then the term “imitation” must be placed immediately before or after the name of the food.

In other words, the legislation isn’t really concerned about the marketing practices of plant-based companies so much as trying to impose a scarlet letter on plant-based products to hurt them and to help the meat industry.

To the extent that misbranding and improper labeling are alleged concerns, these are issues that are supposed to focus on consumers and not on protecting one industry from competition from new competitors.

From the consumer protection perspective, there’s no need for any legislation (state or federal) regarding plant-based products. Here are some reasons why:

—The most important point: The plant-based companies’ business models and their success are dependent on consumers understanding that their products are in fact not meat from animals.

Their customers don’t want to eat meat for a variety of reasons, from animal welfare concerns to a belief (right or wrong) that they are purchasing a more environmentally-friendly product. Therefore, these companies have every incentive to ensure that consumers understand that their products are not meat.

—In general, the names and packaging clearly communicate that the products are plant-based and not meat.

—These products, such as veggie burgers, have been on the market for many years and there’s no history of consumer confusion. Consumers, especially those who are seeking out these products, understand what they are buying.

—Requiring “imitation” to be placed on the packaging is misleading because it serves to give the misimpression that the product is objectively an inferior product and unnatural.

—Forcing plant-based companies to label something as “imitation” or prohibiting the use of meat-related terms like “veggie burgers” (as some states have done) could actually create more confusion for consumers by changing the terminology for the products that they have purchased for years.

—Regarding any alleged concern over nutrition, there’s no reason to assume people will think that plant-based products have the same nutritional makeup as meat. Plus, nutritional information is already placed on the packaging.

This fight, taken up primarily by livestock producers, is one that hurts consumers and is a prime example of cronyism.

This doesn’t mean that the meat industry doesn’t have fights that are worth pursuing. It should be pushing back against myths regarding American agriculture and extremist policy ideas, such as meat taxes. It should fight any misleading claims that plant-based products are somehow “clean” and meat is “unclean.”

What it shouldn’t be doing is trying to use the force of government to hinder its competition from accurately marketing products. That’s exactly what the Real MEAT Act would do, as well as other legislative efforts across the country.

In the food sector, a long-standing protectionist scheme is to hurt the competition by restricting the competition’s ability to properly and most effectively communicate the nature of its products to consumers. That’s what some meat producers are trying to do to the plant-based alternative market.

Editors note: This article was updated to stress that not everyone in the meat industry supports these efforts.