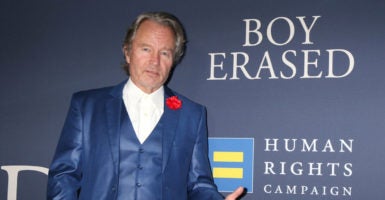 Hollywood is presenting only one side of the debate over counseling for those who experience unwanted same-sex attraction, and it is seeking to silence those who can offer help to the struggling.

Recent films like “The Miseducation of Cameron Post” and “Boy Erased”—both based on true stories—tell the stories of individuals who had negative or even abusive experiences in these kinds of therapies. Activist groups like the Human Rights Campaign and GLAAD are pushing these films to argue for so-called “conversion therapy bans” for minors and for adults.

However, these kinds of laws fail to take into account important concerns about individual freedom—particularly the freedom of patients to have access to all available information that can help them.

Absent from Hollywood’s portrayal of these therapies are the stories of people who actively sought out counseling and had positive experiences.

Take Ken Williams. He bravely shared his story with the California state Legislature earlier this year when the state considered an expansive bill that banned “sexual orientation change efforts,” with expansive and often unclear implications for freedom of speech.

Williams was attracted to men for most of his life, but wanted to change. So he found a therapist and a support group who helped him to pursue that.

“Some of us experienced the change we were looking for in that group, but not everyone did,” he shared. “Despite years of homosexual identity and behavior, my sexual desires did change. I am no longer sexually attracted to men,” he said.

Williams soon met a girl he was attracted to, and they married in 2006.

“Not everyone who finds themselves with same-sex desires [wants] to pursue that,” he said. “So I am trying to understand why people would want to take away the rights of my [group], which is people finding themselves with desires they would like to see changed.”

The California bill would have defined sexual orientation change efforts as “any practices that seek to change an individual’s sexual orientation. This includes efforts to change behaviors or gender expressions, or to eliminate or reduce sexual romantic attractions or feelings toward individuals of the same sex.”

Such broad terminology that includes not only attractions, but actions, has drastic implications for individual freedom.

Such counseling bans completely dismiss the needs of individuals who genuinely desire to pursue counseling, sometimes because of inner conflicts. It also limits the speech of counselors or ministries that support individuals in their personal choice not to act on these desires.

This bill, and others like it, would have granted state government the power to punish counselors or religious leaders acting as licensed counselors who counsel patients who do not wish to act upon their same-sex attraction for legitimate personal reasons—for example, someone who wants to live by their religion’s teachings on sexuality or to remain faithful to their spouse and children.

Ultimately, the representative who introduced this bill into the California Legislature pulled it due to its overly broad language and sweeping implications.

But this will unlikely be the last time state lawmakers consider an outright ban on counseling that they do not consider sufficiently LGBT-affirming.

Fifteen states plus D.C. already have such counseling bans for youth in place, and activists are using these latest films to call for even more bans.

No one is in favor of allowing any kind of abuse to masquerade as “therapy.” But counseling bans are the wrong tool for addressing actual cases of abuse. Silencing speech only limits the options of people who wish to live consistent with what they believe about sexuality.

Banning one side’s speech is not the solution. Unfortunately, the incomplete narrative offered by Hollywood only buttresses these efforts.

We should take into account the legitimate needs of those who wish to pursue therapy that supports their lifestyle choices, even if they don’t conform to the latest cultural trends.

Only then will our public policy simultaneously protect and respect the freedom of everyone.