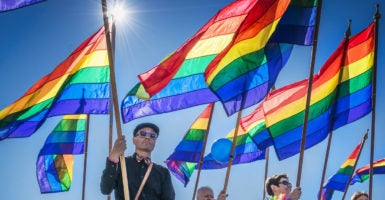 A bill under consideration in California would outlaw speech and writings that the state deems an attempt to change one's sexual orientation. (Photo: Ragnar Th. Sigurdsson/agefotostock/Newscom)

A new bill in California claims to protect LGBT people, but actually limits their choices, censors speech, and infringes upon religious freedom.

AB 2943 would amend the California Consumer Legal Remedies Act—a consumer law that outlaws unfair and deceptive practices—by adding so-called “sexual orientation change efforts” to a list of banned practices. It would in effect ban all practices that the state deems attempting to change one’s sexual orientation—including practices as indirect as the publishing of certain material.

This expansive law would impose widespread censorship that could implicate authors, speakers, counselors, colleges and universities, and even religious leaders seeking to address unwanted same-sex attraction or gender identity confusion.

The bill defines sexual change efforts as “any practices that seek to change an individual’s sexual orientation. This includes efforts to change behaviors or gender expressions, or to eliminate or reduce sexual romantic attractions or feelings toward individuals of the same sex.”

This broad terminology that includes not only attractions, but actions, has drastic implications. The proposed bill could infringe upon the constitutionally protected speech of countless people.

If the bill becomes law, it could punish the speech of religious leaders who preach chastity and, according to the teachings of their religion, maintain that sexual activity should be limited to marriage between one man and one woman.

It could also punish religiously-affiliated counseling services who counsel patients who do not wish to act upon their same-sex attraction for legitimate personal reasons—for example, someone who wants to live by the teachings of their religion on sexuality or to remain faithful to their spouse and children.

It could punish speakers like Ryan T. Anderson of The Heritage Foundation when speaking in California to advocate a traditional view of marriage and human sexuality.

It could punish bookstores, including online platforms like Amazon, that sell recently published books that challenge gender identity ideology, like Anderson’s latest, “When Harry Became Sally: Responding to the Transgender Moment.”

It could also punish religious colleges and universities that maintain codes of conduct requiring students to live consistent with biblical views about sexuality.

This law would be triggered when a transaction occurs—a counselor’s payment, an attendance fee, the cost of a book, or a pastor’s speaking fee. Anyone who is offended by a statement, teaching, or practice with regard to sexual orientation and gender identity could then file a lawsuit against a minister, counselor, author, store, or educational institution that offended them.

A lawsuit could devastate any of these persons or institutions.

First, the accused would be at the mercy of a judge to determine whether or not AB 2943 applies in their case. The California Consumer Legal Remedies Act commands that it be “liberally construed and applied.” By this standard, individuals and institutions would be vulnerable to crippling fines simply for speaking to millennia-old views on human sexuality.

Even if a judge were to spare accused persons from frivolous claims, AB 2943 would still have a chilling effect, as individuals and institutions begin to censor their own speech in order to avoid undergoing multiple costly lawsuits.

This places a burden on the free exercise of religion, too. If individuals or organizations cannot preach the faith-based response to same-sex attraction and gender identity, they cannot freely practice their religion.

Ultimately, AB 2943 treats faith-driven activity to counsel chastity as fraudulent and deceptive, directly violating Justice Anthony Kennedy’s admonition in Obergefell that “religious organizations and persons [be] given proper protection as they seek to teach the principles that are so fulfilling and so central to their lives and faiths.”

Such an assault on free exercise hurts everyone. Civil liberties travel together, and when we set a precedent for the government to silence certain viewpoints in one context, we should fully expect to see censorship arise in other areas.

The broad nature of AB 2943 also fails to consider those LGBT individuals who may seek help in their efforts to refrain from acting on certain inclinations. These individuals would be denied professional and personal help under AB 2943.

The policy would also affect transgender persons who later cease identifying with the opposite sex and wish to transition back to their biological sex. Under AB 2943, such individuals would be categorically denied the help and support they desire.

AB 2943 poses an imminent threat to civil liberties in California. It does little to protect LGBT persons and only limits the number of perspectives (and assistance) they have access to, while setting a dangerous, Orwellian precedent for government-mandated censorship.

Policymakers must act quickly before the bill can be signed into law.