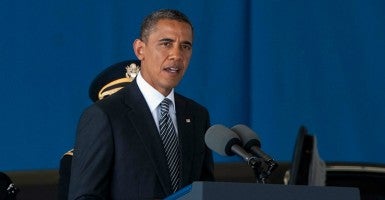 The Obama administration’s decision recently to honor two former Navy SEALs, killed in the line of duty overseas, is so obviously the right one and should have been taken long ago.

The case that brought the change in policy was that of Benghazi victim Glen Doherty, whose family has been clamoring for justice, or at least recognition of Doherty’s supreme sacrifice.

Doherty was among the Tripoli-based GRS security contractors who flew to Benghazi to help the staff at the beleaguered and burning Benghazi diplomatic facility on the night of Sept. 11, 2012, as the victims were frantically radioing for help.

At the CIA compound Doherty, along with CIA contractor Tyrone Woods, engaged in a firefight with the terrorists. The two were killed by a mortar fired by the well-armed terrorists. Neither Doherty nor Woods hesitated to put their own lives on the line to save many fellow Americans stationed in this increasingly dangerous Libyan outpost.

Families of CIA operatives and security staff killed in the line of duty, going back to the Khobar Towers bombing in 1983, will be awarded $400,000. Not a huge amount of money, and of course money cannot bring back the victims of terrorism. But at least it is a belated gesture from their government that they died in the service of their country, even if that government would have preferred to keep its operations in Benghazi under the radar.

Doherty did have a life insurance policy, which turned out to cover only spouses and children. Unmarried, he had neither. But he did have a mother and siblings, who have grieved deeply for his loss, but disgracefully been given the runaround by the State Department and the White House.

Why it has happened this way is central to the story of Benghazi. The Obama administration, from day one after the attack, has never owned up to the policy disaster that resulted in the unnecessary loss of four American lives, including that of Ambassador Christopher Stevens—from the misleading official talking points that downplayed the terrorist threat in post-Gaddafi Libya, to the State Department’s slow-motion handing of documents requested by the Benghazi Select Committee, to the evasions of real and appropriate questions from the grieving families.

Even in the last stretch of the Benghazi Committee’s work, the State Department has been discovered moving Benghazi files from office to office, despite pending a Freedom of Information Act request. It resulted in a year’s delay in the investigation. Pulling teeth seems easy compared to getting the truth from the U.S. government about what happened in Benghazi.

This piece has been updated by the author to correctly state Glen Doherty’s actions on Sept. 11, 2001.