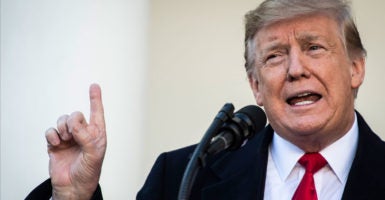 Congressional Democrats are inviting an array of controversial guests to President Donald Trump’s State of the Union address on Tuesday night—including illegal immigrants, military service members who identify as transgender, and a woman who sought to defeat the Senate confirmation of Supreme Court Justice Brett Kavanaugh.

At least one Republican lawmaker is also getting in on the act.

Rep. Alexandria Ocasio-Cortez will have a newsmaker with her at the State of the Union address. The New York Democrat posted a hint about the identity of her guest on Instagram with a picture of a pin that reads “Well-Behaved Women Rarely Make History.”

Her guest is Ana Maria Archila, who is best-known for confronting then-Sen. Jeff Flake, R- Ariz., as he entered a Capitol Hill elevator after the Kavanaugh hearings, but before the Senate voted to confirm him.

Archila, the co-executive director of the Brooklyn, N.Y.-based liberal Center for Popular Democracy, was caught on camera yelling her story to Flake of being a victim of sexual assault in an effort to change his vote on Kavanaugh’s nomination.

Federal employee Trisha Pesiri-Dybvik will be the guest of Sen. Kamala Harris.

The California Democrat announced on Twitter that Pesiri-Dybvik was one of the 800,000 federal workers who went without paychecks during the recent partial federal government shutdown. Pesiri-Dybvik and her husband, both air traffic controllers, lost their home in 2017 to the Thomas wildfire in Ventura, California.

“I’m honored she will join me at the State of the Union,” said Harris, who has announced her candidacy for the 2020 Democratic presidential nomination.

Democrats are also inviting at least four people who identify as transgender and who are either military veterans or currently serving, in what the liberal website ThinkProgress is calling “a visible rebuke of President Donald Trump’s efforts to ban them from serving.”

In January, the Supreme Court allowed the Trump administration’s transgender military policy to go into effect. The policy prohibits people with gender dysphoria, a “psychological condition marked by significant emotional distress caused by a conflict of gender identity and biological sex,” from joining the military.

Illegal immigrants will also be in attendance at the State of the Union address, according to the Daily Beast, including Victorina Morales, an illegal immigrant from Guatemala. She was invited by Rep. Bonnie Watson Coleman, D-N.J.

Kasky spoke at the March 24, 2018, March for Our Lives in Washington, an event supporting gun control that he also helped organize.

Andy Pollack—the father of Meadow Pollack, one of the 17 victims of the Parkland shooting—will also be attending as the guest of Sen. Rick Scott, R-Fla.

Pollack has worked to push his eight-point school safety plan, which includes having safety volunteers at schools, instituting single points of entry with metal detectors at them, and adding more mental health resources and armed staff to schools, according to the South Florida Sun Sentinel.

“The media focuses on gun control, and it doesn’t work,” Pollack said in an interview on Fox News in 2018. “That’s a big issue, so my issue is: Let’s change it this time. My daughter was murdered, and I’m going to do something different.”