Supreme Court Takes Up Challenges to Near Limitless Power of EPA 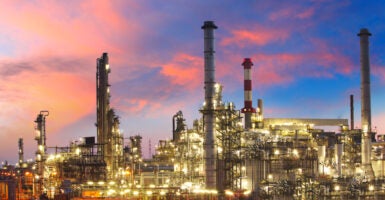 This term the Supreme Court will hear four consolidated cases challenging the Environmental Protection Agency’s power to regulate greenhouse gas emissions from power plants. That question will impact all electricity consumers, but the cases may have larger implications for the ever-expanding reach of the administrative state.

The lead case—West Virginia v. EPA—questions the constitutionality of an ancillary provision of the Clean Air Act that, according to a divided panel of the U.S. Court of Appeals for the D.C. Circuit, gives the EPA broad power to regulate almost any part of the economy that produces greenhouse gases. Joining West Virginia are three other petitioners who are also challenging the EPA’s authority to implement binding nationwide standards.

These cases arise out of more than a decade of legal, regulatory, and congressional turmoil over whether and how to regulate greenhouse gas emissions.

In the 2007 case Massachusetts v. EPA, the Supreme Court settled the question of “whether,” determining that the EPA could regulate greenhouse gas emissions as an “air pollutant” under the Clean Air Act, despite silence from Congress in the statute. What seemed like esoteric statutory interpretation opened the door for the EPA to set economic policy as it established climate policy.

“How” remains an open question that Congress has been unwilling to legislate on, knowing that policies that increase energy costs for questionable environmental benefits do not sit well with its constituents.

While it appears the question that the Supreme Court answered in 2007 will not be revisited, the court will evaluate the EPA’s two attempts since then to regulate greenhouse gases from power plants.

The first was the Obama administration’s expansive Clean Power Plan, a modified cap and trade program that likely would have forced the closure of coal and natural gas plants, and which The Heritage Foundation estimated would increase electricity prices and cause the loss of over $2.5 trillion in gross domestic product by 2030. The Trump administration withdrew the Obama rule in favor of its own more narrow Affordable Clean Energy rule, finalized in 2019.

Both were at play in the D.C. Circuit’s January 2021 decision, which the Supreme Court will now review. There, the court held that the Trump administration’s withdrawal of the Clean Power Plan and its own attempt to rewrite regulations were arbitrary and capricious and that the EPA has almost unlimited power to regulate greenhouse gas emissions from power plants.

The challengers argue that the D.C. Circuit’s opinion was divorced from the statutory limits that Congress placed on the EPA’s power and violated established case law limiting the power of the administrative state. They warned of “serious and far-reaching costs” if the Supreme Court did not intervene.

This perhaps explains why the Supreme Court made the surprising decision to take up the question of the scope of EPA’s authority even before the Biden administration publishes its own draft rules.

The Supreme Court’s decision will have implications for the Biden administration’s intended regulation of greenhouse gas emissions from power plants, how and where Americans get energy, and how much more it will cost.

While the EPA’s regulation of greenhouse gas emissions is the immediate occasion for the case, it involves deeper constitutional questions about the separation of powers between Congress and the executive branch. Consequently, the case could also have far-reaching implications for the ever-expanding reach of executive branch agencies if the Supreme Court sides against the EPA, as is likely.

In its decision, the Supreme Court could invoke the nondelegation doctrine, a rarely used doctrine holding that Congress cannot give executive agencies its constitutional law-making responsibility without some sort of clear limiting principle.

If a majority of justices conclude that the nondelegation doctrine applies here, the Supreme Court could dramatically rein in the power of the administrative state by broadly restricting how much power Congress is allowed to give it.

Alternatively, the court could exercise a middle-ground approach to limit the EPA’s reach with the “major questions” doctrine. Under that doctrine, a court presumes that Congress did not give executive agencies regulatory control over major economic or political questions unless Congress clearly expressed its intent to do so.

In deciding West Virginia v. EPA, the Supreme Court could hold that the D.C. Circuit’s opinion violated the major questions doctrine by giving the EPA sweeping authority to regulate most sectors of the economy without a clear congressional mandate. That result would reduce the EPA’s power unless and until Congress passes a law clarifying that it intends for the EPA to have such sweeping powers over the economy.

West Virginia v. EPA will undoubtedly be the most consequential environmental case the Supreme Court takes up this term—whether it rules narrowly on the technical scope of the EPA’s authority to regulate greenhouse gases under the Clean Air Act, or it endeavors to answer broader questions about the roles of Congress and executive agencies.

Americans should hope the Supreme Court uses this opening to return policymaking to the hands of their elected representatives, rather than to unaccountable bureaucrats trying their hardest to run our lives.