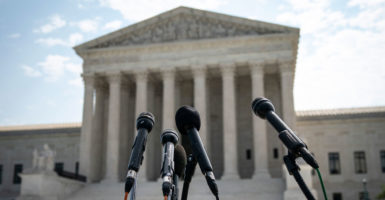 The Supreme Court decided on Monday that states can require Electoral College voters to back the winner of their state's popular vote in a presidential election. (Photo: Drew Angerer/Getty Images)

In a decision issued Monday, the Supreme Court ruled that states can punish presidential electors who break their pledge to support the presidential candidate preferred by the citizens of their states.

The ruling affirms the Electoral College as an important part of our constitutional structure—one that balances popular sovereignty with the benefits of a federal system in which state governments play a vital role.

Every four years, Americans cast votes for their preferred presidential candidate. But what voters in 48 states are actually selecting is a slate of electors who have pledged to vote, as members of the Electoral College, for the candidate who wins a majority of their state’s popular vote. (Maine and Nebraska employ a slightly more complex allocation system based on the winner of the popular vote and congressional districts).

While we all vote in November, the electors meet in state capitols in December to cast their votes.

The number of Electoral College votes to which each state is entitled is the total of their two U.S. senators and the number of members they have in the House of Representatives. This arrangement balances the interests of the larger states with larger populations and the smaller, often more rural states with smaller populations so that presidential candidates won’t ignore those smaller states and campaign only in the large, urban population centers.

But what happens when one of those electors defects?

The Supreme Court confronted those questions and answered “yes” to both.

These questions were not hypothetical. In 2016, three electors from the state of Washington pledged to vote for Democratic presidential candidate Hillary Clinton. Hoping to throw the election into the House of Representatives (which happens if no candidate receives a majority of Electoral College votes—currently 270), the three cast their votes for Colin Powell—even though Clinton carried the state. Washington fined them $1,000 each, in accordance with state law.

The faithless electors sued in state court arguing the fines violated the Constitution and their right to exercise a different choice in casting their vote, but the Washington Supreme Court upheld the law and the fines.

Similarly, in Colorado, three electors pledged to cast their Electoral College votes for Clinton in 2016 and announced they would instead cast their votes for former Ohio Gov. John Kasich.

Only one actually did so, because after he voted for Kasich, the Colorado secretary of state immediately removed him from his position, cancelled his vote, and replaced him with a different elector who voted for Clinton. The other two electors saw this and begrudgingly cast their votes for Clinton, too, despite their expressed desire to vote for Kasich.

All three electors sued in federal court, and the 10th U.S. Circuit Court found that Colorado had violated the Constitution by removing the elector who had actually voted for Kasich and nullifying his vote.

These “faithless” electoral votes in Washington and Colorado were both part of a concerted effort in 2016 to convince electors to break their pledges in order to throw the election into the House of Representatives. Only “seven electors across the Nation cast faithless votes—the most in a century but well short of the goal.”

Why did the U.S. Supreme Court decide that the Washington Supreme Court was right and that the 10th Circuit was wrong? It looked at the text of the Constitution.

Article II of the Constitution is very straightforward. It says that states can appoint electors “in such Manner as the Legislature thereof may direct.”

Eight Justices agreed that “Article II, § 1’s appointments power gives the States far-reaching authority over presidential electors, absent some other constitutional constraint,” meaning that as a condition of appointment, a state “can demand that [an] elector actually live up to his pledge, on pain of penalty.”

Going further, Justice Elena Kagan, writing for these eight, noted that “nothing in the Constitution expressly prohibits States from taking away presidential electors’ voting discretion.”

Justice Clarence Thomas, who concurred in the judgment, rejected the majority’s Article II analysis because he believes this last point really holds the key to the outcome.

He said, “The Constitution does not address—expressly or by necessary implication—whether States have the power to require that Presidential electors vote for the candidates chosen by the people. Article II, § 1, and the Twelfth Amendment provide for the election for the President through a body of electors. But neither speaks directly to a State’s power over elector voting.”

Regardless, all nine justices agree that the Constitution does not prohibit states from limiting electors’ discretion.

The majority did give nod to the idea that both John Jay in Federalist 64 and Alexander Hamilton in Federalist 68 seemed to indicate that electors would exercise some discretion. But, “Whether by choice or accident, the Framers did not reduce their thoughts about electors’ discretion to the printed page.”

The “sparse instructions [in the Constitution] took no position on how independent from—or how faithful to—party and popular preferences the electors’ votes should be.”

Essentially, whether electors can exercise discretion is up to the states. Though, as the majority went on to point out, historical practice from the earliest days of the Republic shows that electors have long pledged to vote for particular candidates rather than to act as free agents.

Out of more than 23,000 electoral votes cast in our nation’s history, only 180 have been faithless votes. And more than a third of those 180 occurred in 1872 when one of the major party’s candidates died after Election Day but before the electors cast their votes. Faithless electors have never affected the outcome of a presidential race.

Justice Joseph Story was an early and authoritative source on American constitutional law. In 1833 he wrote that any “exercise of an independent judgment [by electors] would be treated as a political usurpation, dishonourable to the individual, and a fraud upon his constituents” because in nearly all cases the electors had already “silently” or “publicly pledge[d]” how they would vote.

Echoing Justice Brett Kavanaugh’s concerns at oral argument, this result is faithful to the text of the Constitution and avoids creating chaos if all states had to allow their electors to act as free agents.

After all, while chaos might make for compelling television, it makes for terrible governance.

Kagan emphasized this point by describing what happened in the 1796 election when political rivals John Adams and Thomas Jefferson, “the leaders of the era’s two warring political parties—the Federalists and the Republicans—became president and vice president respectively.”

According to Kagan, “One might think of this as fodder for a new season of ‘Veep,’” the hit HBO series. In reality, though, it made actual governance difficult and created some degree of chaos.

To hammer home this point, Kagan needed to look no further than the next election in 1800 and the popular Broadway show “Hamilton.”

She explained how, when the 1800 election ended up in the House of Representatives because Jefferson and Aaron Burr tied in the Electoral College, “Alexander Hamilton secured his place on the Broadway stage—but possibly in the cemetery too—by lobbying Federalists in the House to tip the election to Jefferson, whom he loathed but viewed as less of an existential threat to the Republic.”

Fortunately, in 1804, the states ratified the 12th Amendment requiring electors to cast separate votes for the president and vice president. That alleviated the chaos caused by the original workings of the Electoral College.

As Heritage Foundation President Kay Cole James succinctly summarized, the court’s decision safeguards our “Electoral College system, which has protected our democratic process and provided unprecedented stability in our form of representative democracy for more than two centuries.”

Through the mechanisms established in our Constitution, including the Electoral College, “We the People” choose our leaders and retain ultimate sovereignty over our own affairs. The Supreme Court has just helped us maintain that sovereignty.