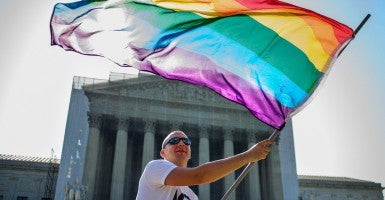 One week from today, the Supreme Court will hear oral arguments about gay marriage. Here’s what you need to know.

1. There simply is nothing in the U.S. Constitution that requires all 50 states to redefine marriage. Whatever people may think about marriage as a policy matter, everyone should be able to recognize the Constitution does not settle this question.

Unelected judges should not insert their own policy preferences about marriage and then say the Constitution requires them everywhere.

Those suing to overturn male-female marriage laws thus have to prove that the man–woman marriage policy that has existed in the United States throughout our entire history is prohibited by the Constitution. They cannot successfully so argue.

Our Constitution is silent on which of these visions is correct, so We the People have constitutional authority to make marriage policy.

The debate over whether to redefine marriage to include same-sex relationships is unlike the debate over interracial marriage. Race has absolutely nothing to do with marriage, and there were no reasonable arguments ever suggesting it did.

4. The only way the Court could strike down state laws that define marriage as the union of husband and wife is to adopt a view of marriage that sees it as an essentially genderless institution based primarily on the emotional needs of adults and then declare that the Constitution requires that the states (re)define marriage in such a way.

Equal protection alone is not enough. To strike down marriage laws, the Court would need to say that the vision of marriage that our law has long applied equally is just wrong: that the Constitution requires a different vision entirely.

But the Constitution does not require a new vision of marriage.

Advocates for the judicial redefinition of marriage cannot reasonably appeal to the authority of Windsor, to the text or original meaning of the Fourteenth Amendment, to the fundamental rights protected by the Due Process Clause, or to Loving v. Virginia. So, too, one cannot properly appeal to the Equal Protection Clause or to animus or Lawrence v. Texas.

Nor can one say that gays and lesbians are politically powerless, so one cannot claim they are a suspect class. Nor can one say that male–female marriage laws lack a rational basis or that they do not serve a compelling state interest in a narrowly tailored way, as explained in Heritage Foundation legal memorandum “Memo to Supreme Court: State Marriage Laws Are Constitutional.”

5. Everyone in this debate is in favor of marriage equality. Everyone wants the law to treat all marriages in the same ways.

The only disagreement our nation faces is over what sort of consenting adult relationship is a marriage. Since the U.S. Constitution doesn’t answer that question, the people and their elected representative should.

And they should democratically enact laws that define marriage as the union of man and woman, husband and wife, mother and father.

6. Marriage exists to bring a man and a woman together as husband and wife, to be father and mother to any children their union produces. Marriage is based on the anthropological truth that men and woman are distinct and complementary, the biological fact that reproduction depends on a man and a woman, and the social reality that children deserve a mother and a father.

Marriage is society’s best way to ensure the well-being of children. State recognition of marriage protects children by encouraging men and women to commit to each other—and to take responsibility for their children.

7. Redefining marriage to make it a genderless institution fundamentally changes marriage: It makes the relationship more about the desires of adults than the needs—or rights—of children. It teaches that mothers and fathers are interchangeable.

8. Rather than rush to a 50-state “solution” on marriage policy for the entire country, the Supreme Court should allow the laboratories of democracy the time and space to see how redefining marriage will impact society as a whole.

There is no need for the Court to “settle” the marriage issue like it tried to settle the abortion issue. Allowing marriage policy to be worked out democratically will give citizens and their elected representatives the freedom to arrive at the best public policy for everyone.

As the 6th Circuit noted when it upheld several states’ marriage laws, “federalism…permits laboratories of experimentation—accent on the plural—allowing one State to innovate one way, another State another, and a third State to assess the trial and error over time.” Judges should not cut this process short.

At the end of the day, this is a debate about whether citizens or judges will decide an important and sensitive policy issue—in this case, the very nature of civil marriage. Read more about it in our legal memo.