G-20 Needs a Freedom and Prosperity Agenda More Than Ever 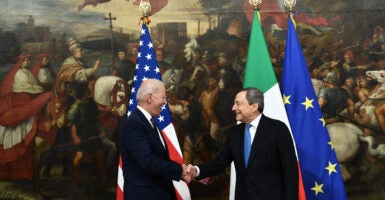 The first in-person gathering of the world’s 20 biggest economies, the Group of 20, since the onset of COVID-19 pandemic will take place in Rome, Italy, from Oct. 30 to 31. To say the least, the summit should not be business as usual. Regrettably, there’s reason to believe that the meeting will fail to address the issues that are most relevant to the G-20.

Italy’s “climate-focused” G-20 has billed “people, planet, and prosperity” as the top priorities for the summit, largely echoing the themes of the G-20 talks in the past.

When G-20 heads first congregated about a decade ago in November 2008, the trigger of the gathering was the global financial crisis, with the composition of the group reflecting the shift in the world’s economic center of gravity towards Asia and the emerging economies around the world. Unfortunately, G-20 summit meetings since then have been long on words—mountains of the same words—but short on real, concrete accomplishments.

President Joe Biden will attend this year’s G-20 gathering to promote his big government “build back better” agenda—and agenda chock full of issues that are not pragmatically relevant to restoring optimal conditions for global economic recovery and growth.

The focus of the G-20 meeting, in which Biden’s national security adviser Jake Sullivan said the U.S. and Europe would be “energized,” “united,” and “driving the agenda,”  is expected to be about whether and how to undertake an economic rearrangement with climate change and social equity at the core.

Equally notable is that Chinese president Xi Jinping, who hasn’t left China since early 2020, will participate just virtually, along with his comrade Russian President Vladimir Putin. Japan’s new Prime Minister Fumio Kishida and Mexican President Andrés Manuel López Obradorwill be also absent. And the United States, Australia and France will be at the same table for the first time since Washington’s recent announcement of the U.S.-Australia-U.K. trilateral security partnership that made France’s Emmanuel Macron quite unhappy.

Despite the less than optimal setting of the upcoming G-20 meeting, the U.S. needs to be clear in its principles at the summit, particularly based on the foundations of economic freedom and democratic values.

Unambiguously, the past months since early 2020 have been extraordinary for the global economy, with slowing growth and turmoil gravely inflicted by the ongoing pandemic.

The principles of economic freedom have always been questioned by dictators, autocrats, and others who might benefit from centralized planning and control. Now, however, populist attacks on the free market—fueled by politics in the United States and other countries, as well as by actual coronavirus-related setbacks to the economy—have gained notable momentum.

More than ever, however, it should be reminded that fundamentally a nation’s capacity to grow and prosper hinges on the quality of its institutions and economic system. As documented by The Heritage Foundation’s annual Index of Economic Freedom that evaluates the extent and effectiveness of policies in four key areas of rule of law, size of government, regulatory efficiency, and open markets, countries with higher degrees of economic freedom tend to measurably prosper in far more lasting and resilient ways. (The Daily Signal is the news and commentary platform of The Heritage Foundation.)

That’s because they capitalize more fully on the ability of the free market system to not only generate, but also to reinforce, dynamic growth through efficient resource allocation, value creation, and innovation.

Regrettably, some of the policy measures undertaken or planned by governments around the world in response to the global health crisis run the risk of undermining economic freedom and, thus, long-term economic growth and prosperity.

Policymakers in Washington and around the globe cannot simply spend their way back to prosperity after the toll public health responses have taken on local economies. For a meaningful economic recovery, it’s essential that economic freedom is not curtailed by extended government emergency powers.

The path by which the global economy can emerge from this pandemic stronger than we were before runs through a recommitment to the proven ideas of the free market system. It would be a tragic mistake to assume that in a time of crisis we must abandon our commitment to economic freedom in the hope of politically resetting the situation.

That freedom has unambiguously made our societies vibrant as well as flourishing.