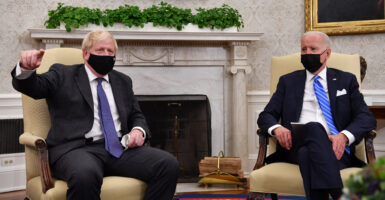 President Joe Biden confers with British Prime Minister Boris Johnson in the Oval Office at the White House on Sept. 21. The meeting did not provide a clear timeline for reinvigorating the stalled bilateral free trade agreement talks between Washington and London. (Photo: Nicholas Kamm/AFP/Getty Images)

Sharan Kumar is a member of the Young Leaders Program at The Heritage Foundation. He studied economics and international relations at Boston University.

The recently unveiled U.S.-Australia-U.K. trilateral security partnership is intended to deepen the security ties between the three longtime allies.

The new partnership has been marketed as a strategic security alliance, with the Biden administration underscoring that “[AUKUS] is a fundamental decision—fundamental—that binds decisively Australia to the United States and Great Britain for generations.”

A key part of that binding will need to be built through strong economic ties, and the rise of a new U.S.-Australia-U.K. security alliance to potential prominence may amount to little more than hollow promises if the United States fails to demonstrate leadership in advancing free trade and investment.

If the U.S. is to be a credible leading force in the Indo-Pacific, America must prove itself a positive and dependable actor—not a reactive and unpredictable one—particularly when it comes down to trade and investment.

The U.S. can and should step up its own game considerably. Washington’s evolving efforts to become more deeply engaged in the Indo-Pacific region, raise the American profile, and elevate its participation in the region are very well advised. However, without a discernible trade component, particularly America’s leadership in building a predictable open trading environment, it will be an empty gesture.

The U.S. relationships in the region need substance, and the substance that counts in a concrete and practical way these days is trade. America should strengthen enduring alliances and build on nascent ones by increasing measurable economic opportunities and collaboration—by removing barriers to open trade.

America needs to get back to the free trade table, which will reinforce the network of alliances and partnerships America has invested in and built over decades.

It’s notable that China’s quick response to the announcement of the new U.S.-Australia-U.K. alliance was not military, but economic. In less than 24 hours, Beijing had formally applied for membership in the Comprehensive and Progressive Agreement for Trans-Pacific Partnership (CPTPP), an 11-nation regional free trade agreement.

Clearly, China is aiming at flipping the strategic game plan on the United States through trade and investment.

In this evolving geostrategic context, the new U.S.-Australia-U.K. partnership must go beyond a trilateral security pact. A unique triangle network of free trade can be built upon that, and more importantly amplify the security alliance to the next level.

2020 marked the 15th anniversary of the U.S.-Australia Free Trade Agreement. Over the years, the two allies have enjoyed greater trade and investment interaction since the pact entered into force in 2005. The agreement eliminated previous trade barriers, resulting in a doubling of trade between the two countries and a tripling of two-way investment between the two countries to about $1.3 trillion.

Like the U.S.-Australia Free Trade Agreement, in an effort to secure and build on the already vital economic and security partnership between the U.S. and the U.K., the two nations embarked on negotiations for a long-desired free trade agreement last year, shortly after the U.K. withdrawal from the European Union.

Unfortunately, the negotiations—a high priority for both then-President Donald Trump and British Prime Minister Boris Johnson, with bipartisan support in the U.S. Congress—have been derailed at this juncture.

Worse, the recent White House summit between President Joe Biden and the U.K.’s Johnson did not provide a clear timeline for reinvigorating the stalled bilateral free trade agreement talks between Washington and London.

Revitalizing the stalled bilateral free trade negotiations with the U.K. and implementing the U.S.-U.K. Free Trade Agreement in a timely fashion is critical, now more than ever.

The Biden administration underscored that “[f]or more than 70 years, Australia, the United Kingdom, and the United States have worked together … to protect our shared values and promote security and prosperity. Today, with the formation of AUKUS, we recommit ourselves to this vision.”

Advancing free trade and investment is vital to ensuring that vision. Economic security driven by the advancement of economic freedom at home and abroad—not by the proliferation of protectionism—truly enhances national security, which in turn buttresses greater economic dynamism.

The time for Washington to act on that is now.