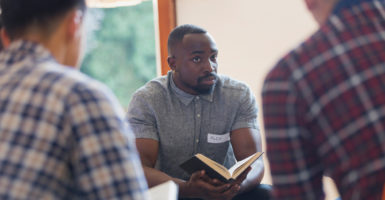 Forty-two percent of those who attend a recently planted church were previously “unchurched,” having either never attended or not attended in many years. (Photo: Caiaimage/Tom Merton/Getty Images)

Suicide and depression are becoming increasingly normal in America, and our communities are living with the fallout.

But there is a growing trend that’s already making a difference.

When you plant something, it’s meant to bloom, thrive, and add beauty to the world. So it is with planting new, life-giving churches among a harsh, increasingly anti-religious landscape in many parts of America.

Church plants are what much of these ugly, broken spaces need—and there is already proof that such churches are producing good fruit. Let’s talk about why, and where, these gutsy little communities can make a real difference.

One thing we know about rates of depression, suicide, addiction, and overdose is that location matters. Spikes in overdose deaths and drug prevalence appear in very specific places—once-booming factory towns, like Portsmouth, Ohio, that lost vitality along with factory shutdowns, job loss, the emergence of pill mills, and the loss of hope.

Suicide numbers are highest in states with fewer people, where people often live spread out, far from one another and without easy access to human contact on a daily basis. In fact, the top three least-densely populated states—Alaska, Montana, and Wyoming—have the highest suicide rates, according to the Centers for Disease Control and Prevention.

America’s epidemic of despair includes another telltale symptom: a decline in church attendance, civic engagement, and the closing of churches at record rates across the country. Today, at least 100 churches close per week nationwide, and more people across the board identify religiously as “none” more than ever before, according to the Pew Research Center.

Older churches attempting to remain relevant have trouble retaining members and adapting to the needs of their communities. Additionally, 61 percent of pastors report a decline in attendance and 68 percent admit they had no involvement in church planting, which is one of the best ways to reach unchurched Americans who are desperate for outreach.

Here, we’ve reached a bedrock tool for changing the trajectory of the nation: church planting.

It sounds simple, and even boring if you’re unfamiliar, but the proof of concept attached to this growing trend is important. It’s not an experiment, requiring results from a body of research to prove it’s working. The proof is already available: Local church plants are springing up like weeds and meeting people where they are today.

In Indianapolis, Indiana, where I live, a contingent of church leaders intends to plant small churches in each corner of suburbia and down every dirt road bordering a cornfield.

If you think there are too many churches where you live already, you’re wrong. Many old school, traditional churches have long lost appeal to a generation that is drown in despair or that long ago lost interest in “organized religion.”

Many of these new church-planting leaders, convicted that this is their mission field, are shifting their lives to plant roots in small rural towns or very specific segments of a city. They aim to revive those places, to transform them into communities where “everybody knows your name” and people feel seen, cared for, and missed when they don’t make it to a service or skip the Friday night BBQ.

These barely-funded endeavors to reach the unchurched are making a difference in the lives of Americans from rural towns to inner cities.

Americans of all demographics should applaud this growing trend. The church is showing it can embrace new tactics that bring the church to the people, in the environments they already inhabit, rather than requiring them to enter through a daunting doorway where they know no one.

And make no mistake: Church plants are reaching new demographics. Forty-two percent of those who attend a recently planted church were previously “unchurched,” having either never attended or not attended in many years.

Our ailing communities call for an army of small, locally rooted churches to reach people where they are. Whether they hold church in middle school gyms, movie theaters, libraries, living rooms, or parking lots—the building doesn’t matter. What matters is locational access and a community that welcomes newcomers with open arms.

In 2017, 72,000 Americans died from drug overdoses and 9.4 million U.S. adults considered suicide. The chances that many of these people were not attending church are high. Research reveals that regular church attenders are five times less likely to attempt suicide than those who do not attend.

The decline of church life in America has been devastating America’s social fabric. There is now a desperate need to rebuild the kind of sacred, authentic communities that offer people a place to belong—not to mention the chance to forge a relationship with God that brings hope, purpose, and perspective to our lives.

Church planting is one foundational tool to effect that end, since it brings the church to people who may not be inclined to drive 20 minutes to seek out a church that “works for them.”

Americans who are concerned to reverse the heartbreaking numbers of depression, addiction, and suicidal thoughts should consider prioritizing, participating in, or promoting church plants in their own neighborhoods.