President’s ‘Word as a Biden’ Isn’t Worth Much, His Record Shows 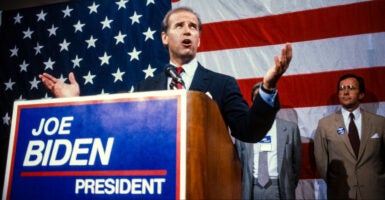 Joe Biden's long history of political mendacity dates back at least to his failed bid for president in the late 1980s, which collapsed amid plagiarism charges. Pictured: Then-Sen. Joe Biden, D-Del., announces his intention to run for the Democratic Party nomination for president on June 9, 1987. (Photo: Howard Sachs/CNP/Getty Images)

He peppers his public statements with it, puts it in his tweets, and holds it up as some sort of gold standard for honesty and integrity. It’s as though the very fact that he carries the surname Biden should serve as assurance to all that he is incapable of telling falsehoods.

Let’s unpack that claim that his “word as a Biden” should be good enough to persuade people that his utterances are ironclad, rock-solid gospel.

It just so happens that his public statements are often demonstrably false, on issues both consequential and inconsequential.

It appears that the most recent time he wielded his name as proof of his honesty was near the end of September, when he tweeted, “I give you my word as a Biden: If you make under $400,000 a year, I’ll never raise your taxes one cent.”

Except that his plan breaks his “word as a Biden,” because “taxpayers across all income levels will face a tax increase,” according to the nonpartisan Joint Committee on Taxation.

Further, Biden’s plan to raise taxes on businesses will hit many people who make less than $400,000, if not in the form of a direct tax. Lower wages will be the result of his corporate tax increase.

On March 18, 2020, during his campaign for president, Biden used the phrasing again while tweeting about the COVID-19 pandemic, “I give you my word as a Biden: When I’m president, I will lead with science, listen to the experts, and heed their advice, and always tell you the truth.”

Except that Biden publicly announced that COVID-19 vaccine booster shots would soon be available, even though medical experts have suggested that there isn’t enough evidence that they are necessary.

Further contradicting Biden, two groups of government scientists—at the Food and Drug Administration and the Centers for Disease Control and Prevention—even voted against recommending the booster shots.

Notably, Biden’s vaccine mandate would require many public and private employers to force their workers to get vaccinated, but fails to take into account the body of evidence that shows that the protection from natural immunity exceeds that provided by the vaccine. Even if you’ve already had COVID-19 and recovered, Biden says you must get the shot anyway.

So much for “leading with science.”

Biden’s more recent history suggests he can’t be relied upon to tell the truth, whether or not he offers his “word as a Biden.”

Facing the prospect that the purported $3.5 trillion price tag for the latest social welfare spending plan might be too large for the public to swallow, Biden has been pushing the outrageous claim that it will actually cost nothing.

While his main argument is that the bill won’t add to the national debt (which is dubious in itself), he slips in language that is intended to lead people to think that it will be totally free.

The Afghanistan withdrawal fiasco, which resulted in the deaths of 13 American service men and women, was a source of many of Biden’s outright false pronouncements.

Among other things, he claimed that no one recommended leaving 2,500 American troops in place to aid the withdrawal, when his generals actually did.

He asserted that Americans were having no trouble getting to the Kabul airport, when they clearly were.

He boasted that no U.S. allies had criticized the management of the withdrawal, when a number of them had been vocal about it.

He stated that al-Qaeda had no presence in Afghanistan, when it does.

And he pledged not to leave Afghanistan before every American was evacuated, which did not happen.

Biden also has picked up the false narrative of those who oppose securing our borders at home, by parroting the lie that Haitian migrants were “whipped” by Border Patrol agents on horseback.

He referred to seeing “people being strapped,” and said that the agents “will pay” for what they did.

But even the photographer who took the pictures that set off the uproar said no one was whipped.

Considering all of this, where does Biden get this idea that he embodies some lofty level of candor? It certainly doesn’t come from his reputation as a U.S. senator for 36 years.

When his first presidential campaign was falling apart in 1987 because of plagiarism scandals and obviously false boasts about his resume, Biden apologized, saying, “I exaggerate when I’m angry, but I’ve never gone around telling people things that aren’t true about me.”

Nevertheless, The New Yorker reported that at the time he was “getting a reputation as a pompous blowhard, and congressional staffers circulated a spoof résumé with Biden’s picture and accomplishments, including ‘inventor of polyurethane and the weedeater’ and ‘Member, Rockettes (1968).’”

That New Yorker writer, Evan Osnos, wrote a book about Biden and noted that “he was regarded as a bit of an arrogant guy, a bit of a blowhard in a town, after all, that is known for blowhards.”

Osnos concluded, “The joke became that Joe Biden was not an authentic person.”

And Jon Favreau, speechwriter for then-President Barack Obama, said, “Biden’s reputation before he became vice president wasn’t ‘middle-class Uncle Joe’ and it also wasn’t too old and out of touch—it was that he was a blowhard.”

This summer, Biden claimed that he used to be a truck driver. Nonsense.

He also boasted that he once blasted a 368-foot drive “off the right-centerfield wall” at old RFK Stadium during a congressional baseball game. It never happened.

While running for president this most recent time, he claimed on at least three occasions that he was arrested by police in South Africa as he attempted to visit Nelson Mandela in prison. That’s also untrue.

He has completely misdescribed and misrepresented a trip to Afghanistan to pin a medal on a U.S. serviceman.

He has claimed repeatedly that he marched in the civil rights movement when he didn’t.

He has wildly exaggerated his academic credentials.

And he was even lampooned by late-night television legend Johnny Carson as a plagiarist 34 years ago.

By now it should be obvious to everyone that Biden’s statements should not be accepted at face value. So that leaves only the question about the core of his “my word as a Biden” premise.

Are various members of the Biden clan so widely celebrated for their honesty and integrity that it has become common knowledge that to be a Biden is to be trustworthy?

His brother, Jim Biden, has “repeatedly tapped into Joe’s political network for help with his finances, and used Joe’s fame to promote his business ventures,” according to ProPublica.

Entering the health care field, Jim Biden told potential investors that “his last name could open doors and that Joe Biden was excited about the public policy implications of their business models,” Politico reported.

Americore Health, a hospital business linked to Jim Biden, filed for bankruptcy in 2019 and has been the subject of a federal investigation. Americore Health saw two of its properties raided by the FBI in 2020.

The news reports include the claim that Jim Biden “transferred money from Americore to himself in the form of personal loans.”

And no discussion of Biden family integrity can be complete without a mention of Joe Biden’s son Hunter.

Hunter Biden has a colorful professional career, to say the least, which the contents of his infamous laptop exposed.

The evidence found there showed that he arranged meetings between his father and foreign businessmen from Mexico, Ukraine, Russia, and Kazakhstan.

Hunter Biden profited immensely from the Ukrainian energy company Burisma, despite having no expertise in the industry, while his father was vice president and in charge of U.S. policy on Ukraine.

And Hunter Biden traveled with his father on Air Force Two to Beijing, where he met with Chinese business associates.

It has been confirmed that Hunter is personally the target of an FBI money-laundering investigation.

And now his newfound career as a profitable artist has ethicists scratching their heads as to why the White House would allow secret transactions between the son of the president and unknown art “collectors” in an industry that is rife with money-laundering schemes.

So, the next time Joe Biden extends his “word as a Biden,” ask yourself: Exactly what is that worth?