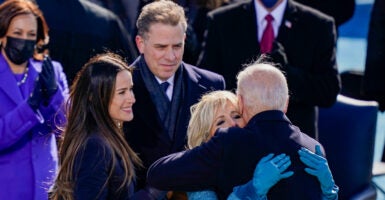 Allow me to join the chorus of voices congratulating Hunter Biden for waking up one day recently as an accomplished and commercially successful artist, a sudden event that curiously corresponded with his father’s becoming president of the United States.

This is surely a coincidence, and certainly only represents the latest shift in Hunter’s colorful career path.

In case you missed the news, President Joe Biden’s son is now a hot commodity in the art world. Though Hunter Biden hasn’t publicly presented his work for sale before, New York City art dealer Georges Berges will conduct two exhibitions this fall—in Los Angeles and New York. Berges projects the pieces will sell at prices ranging from $75,000 for drawings on paper to $500,000 for large paintings.

But if you’re concerned that this represents an opportunity for nefarious characters to covertly line Hunter’s pockets in efforts to influence his father, never fear, the White House has a solution: All details of the transactions will be shrouded completely from public view.

White House press secretary Jen Psaki gave a defense of this “secrecy is transparency” strategy with a howlingly bad explanation Friday that was problematic in every respect.

“All interactions regarding the selling of art and the setting of prices will be handled by a professional gallerist, adhering to the highest industry standards, and any offer out of the normal course would be rejected out of hand,” Psaki said.

Walter Shaub, who was President Barack Obama’s director of the Office of Government Ethics and not a fan of the Trump administration, did not mince words on CNN when asked about this Biden White House “ethics” plan.

Shaub could not have eviscerated Psaki’s presentation of the Biden approach any more brutally.

“They have outsourced government ethics to an art dealer,” he said, clearly not sharing the trust Psaki placed in Berges. “You don’t run an ethics program on the idea that you hope everybody behaves.”

Shaub likewise was not impressed with the “highest industry standards” of the art world cited by Psaki, which CNN previously reported is riddled with money laundering schemes.

“It’s an industry that’s notorious for money laundering,” Shaub said. “There’s no standards in that industry.”

And as far as “any offer outside of the normal course” being rejected by the gallery, as Psaki put it, Shaub again called a foul.

“This is art that hasn’t even been juried into a community art sale,” Shaub said. “How are they going to decide what’s unreasonable when they’ve already priced it in the range of $75,000 to $500,000 for a first outing? This is just preposterous and very disappointing.”

And though Biden World ought to be accustomed to fielding inquiries about Hunter Biden’s, shall we say, questionable financial dealings, they got it exactly wrong even after deliberation.

“What they’ve done is ensure that neither you nor I, nor anyone watching this show, will know who buys the art unless they share it publicly,” Shaub told CNN. “The White House should have first made its move to have the president try to talk him out of doing this. And if that failed, they should have gone in the opposite direction and asked that that the name of buyers be released.”

If the buyers’ names were made public, citizens might have an idea whether someone were trying to buy influence, especially if the White House disclosed the names of those who also sought meetings with administration officials. With the cone of silence around Hunter Biden’s art sales, however, that will be impossible.

The additional, more obvious, reason that greater transparency is desirable is that this son of this president has a history of cashing in on his proximity to power.

Shaub pointed out exactly how this looks.

“It’s got the absolute appearance that he’s profiting off of his father’s fame,” Shaub said. “He’s not selling under a pseudonym. He’s not waiting until his father is out of office. And he’s not selling at any price comparable to what other first-time artists are selling.”

Astute Biden watchers will remember that this is not Hunter Biden’s first foray into profiting off his father’s name and power.

Evidence found on his notorious laptop showed that he arranged meetings between his father and foreign businessmen on numerous occasions. Some were from Mexico and some were from Ukraine, Russia, and Kazakhstan.

It’s widely documented that Hunter Biden profited wildly from the Ukrainian energy giant Burisma, despite having no expertise in the industry, while his father was vice president and in charge of U.S. policy on Ukraine.

And Hunter infamously traveled with his father on Air Force Two to Beijing, where he met with Chinese business associates.

It also should be noted that although Hunter Biden now is doing business in an art world known for dubious transactions, he is also personally the target of an FBI money laundering investigation.

But let’s assume, for one second, that Hunter Biden’s promising new career as a high-priced artist is completely above board and none of the buyers wants to gain access to President Biden’s ear.

Maybe the joke will be on them, because not everyone is convinced that the art is any good.

And Scott Indrisek, former editor in chief of Modern Painters magazine, panned the art, calling it “very much a hotel art aesthetic.”

“It’s the most anonymous art I can imagine,” Indrisek said. “It’s somewhere between a screen saver and if you just Googled ‘midcentury abstraction’ and mashed up whatever came up.”

On second thought, perhaps there is a good reason why someone buying a Hunter Biden painting wouldn’t want anyone to know.