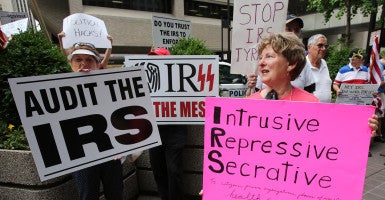 The American people’s trust in government is the lowest it has been in the last 10 years, according to three Gallup polls released recently.

The polls measured the population’s opinions on government corruption, government regulation of business, and whether the government poses an immediate threat to personal liberties.

In a poll that was released on Saturday, 75 percent of respondents said they believe corruption is widespread in the government. This figure has increased from 66 percent in 2009.

“The percentage of U.S. adults who see corruption as pervasive has never been less than a majority in the past decade, which has had no shortage of controversies from the U.S. Justice Department’s firings of U.S. attorneys to the IRS scandal,” Gallup reported.

These reports have certain implications about the state of American politics and where they are headed.

The fact that over the last 10 years the American people have had such a consistent level of distrust toward the government could indicate that the issue of highest priority for most Americans is the government itself.

“From the people’s perspective, then, a focus on the appropriate role for government should be at the forefront of the nation’s continuing political discourse,” Newport said in his report.

As for Dugan’s report, the implications are more nuanced. Dugan said that while half of Americans polled believe there is too much regulation of business, only 21 percent say the government regulates business too little.