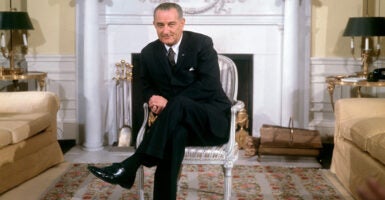 The tax increases being contemplated by President Joe Biden would be the largest since the 10% surtax on business profits and high-income individuals imposed in 1968 by then-President Lyndon Johnson, seen here in an undated photo. (Photo: Schulmann-Sachs/Getty Images)

Faithful to his campaign promises, President Joe Biden is eyeing steep tax hikes, but despite the claim that the tax increases will hit only the wealthy, they have the potential to slow the pandemic recovery for every American and make workers less competitive.

Biden’s proposed tax hike could amount to as much as a $2 trillion tax increase, the largest increase since 1968, when President Lyndon Johnson’s administration imposed a 10% surtax on business profits and high-income individuals.

The year after those tax hikes, the U.S. economy entered a recession, and personal savings decreased significantly. Had the tax increase been permanent, it could have lowered the gross domestic product by eight times more than the increased revenue.

By hiking taxes, Biden could be making the same mistakes as those of the late 1960s.

There are obvious differences, too. Today, the global economy is reeling from one of the most significant economic disruptions in U.S. history, and Congress has authorized an unprecedented $6 trillion in new deficit-financed spending. Not to mention potentially several trillion more dollars for infrastructure projects being teed up next.

Vaccine-driven economic reopening, alongside a flood of federal funds entering the economy, will likely turbocharge some sectors of the economy, resulting in unknowable side effects that could materialize as asset bubbles, inflation, or fiscal crises.

Slapping historically large tax increases on top of those already uncharted waters risks another recession or return to the slow, decade-long recovery Americans endured after the Great Recession.

To sustain the economic recovery, American taxpayers and businesses will need more than just checks from Washington. Productive, private sector investments in new factories, better tools, and innovative research are crucial to any robust economy that benefits workers and drives wage growth.

The Biden tax plan targets these essential sources of investment funds with punitive new taxes, targeting the fuel that will be necessary to sustain our economic recovery.

First, it proposes a 7 percentage-point increase in the U.S. corporate income tax. Such a tax hike would vault American employers from paying tax rates similar to other countries back to one of the world’s highest rates.

High corporate taxes hurt workers. As much as 100% of the tax cost is passed on to workers in the form of lower wages, as their employers invest less in the U.S. and investments flow to other, more welcoming countries.

Second, Biden wants to increase the top tax rate to almost 40%, up from 37%. Others want to push it to as high as 70%. Tax increases on high-income earners may seem innocuous, but they have real-world costs.

When the government taxes something, we get less of it. Higher income tax rates mean that some of the most entrepreneurial and high-performing workers will produce a bit less.

But these rate changes will also hit family-owned businesses that pay taxes at their owner’s income tax rates. Paired with a proposal to cut back a special deduction for these pass-through businesses, the Biden plan could raise taxes on millions of small and medium-sized employers.

High capital gains taxes reduce companies’ ability to raise funds for new investments through equity offerings. They also impose disproportionately higher taxes on riskier investments, such as startups that run losses in the initial years with a small probability of success.

Additionally, raising the capital gains rate much higher than it already is could decrease—rather than increase—tax revenues by creating a destructive incentive to hold on to investments, rather than sell them, to delay paying the tax.

Finally, Biden wants to dramatically expand the death tax. Restoring the estate tax to 2009 levels, as has been proposed, could mean that more than 17,000 estates, many of them small businesses, would be hit by the tax, costing more than 1.5 million jobs—as the levy did in 2008 and 2009.

The tax increases now under consideration are just the start. In the absence of spending reform, taxes will have to increase much higher than is currently being proposed—and not just tax increases on the “rich.” Just look to Europe, where funding big government requires high taxes on everyone.

In fact, it is mathematically impossible to pay for significantly larger government with tax increases only on high-income earners and corporations. That’s why a lower-income European earning $40,000 pays $6,000 more in taxes—an extra 15% of their income—than they would in America.

If Congress wants to help more Americans find jobs and economic opportunity, it should focus on constraining spending growth and keeping taxes low, rather than hiking taxes on the economic recovery.